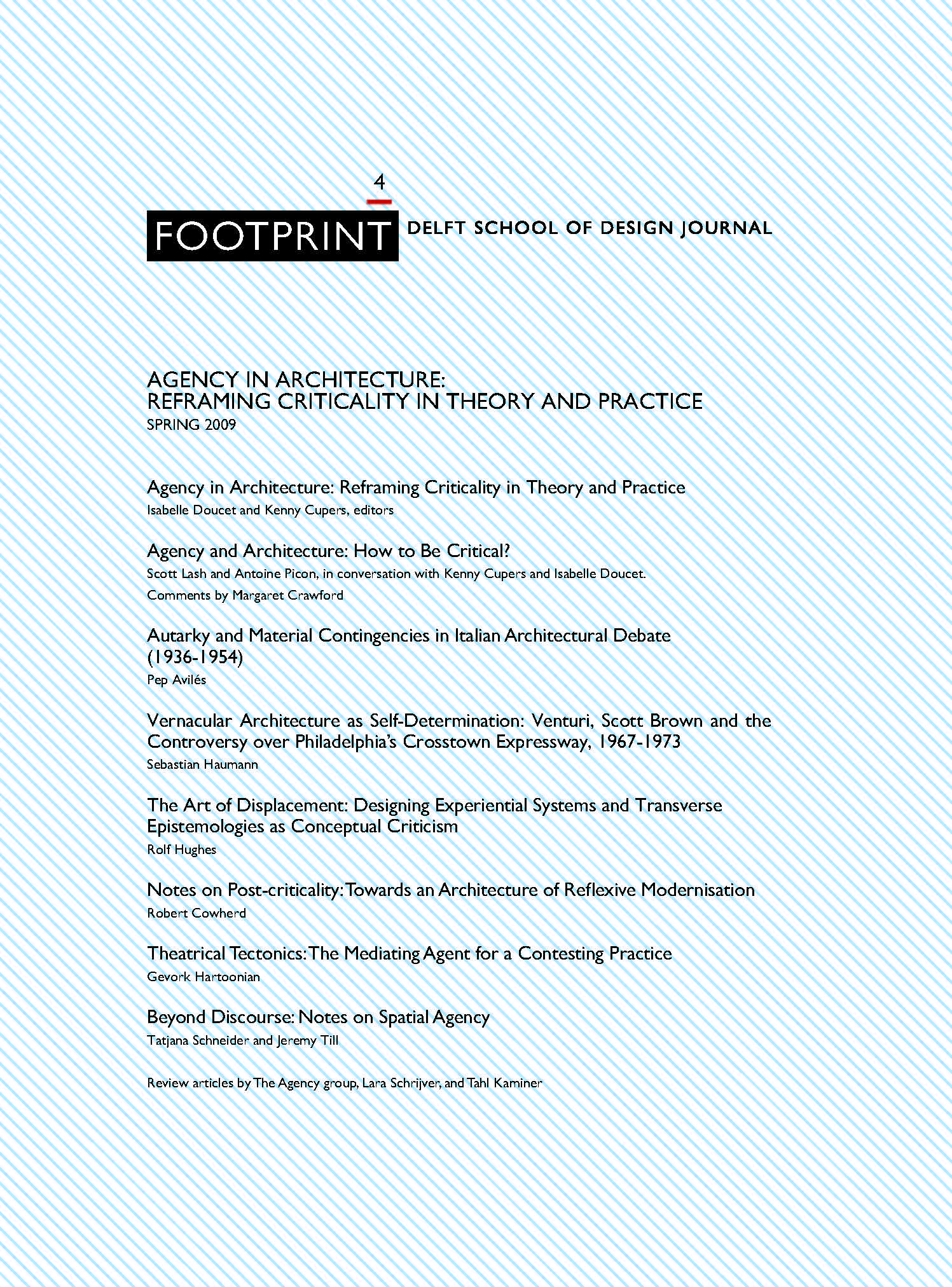 Whether critiquing the architect’s societal position and the role of the user, conceptualising the performative dimension of the architectural object, or considering the effects of theory for architecture at large, current debates in architecture intersect in the notion of agency. As fundamental as it is often taken for granted, this notion forms the keystone of this issue, inviting contributors to rethink architecture’s specificity, its performance, and its social and political relevance. Agency in architecture inevitably entails questioning the relation between theory and practice, and what it might mean to be critical - both inside and outside architecture - today. The main proposal is to rethink contemporary criticality in architecture, by explicating the notion of agency in three major directions: first, ‘the agency of what?’ or the question of multiplicity and relationality; second, ‘how does it work?’, a question referring to location, mode and vehicle; and third, ‘to what effect?’, bringing up the notion of intentionality.

Each of the contributions to this issue throws a new light onto one or more of these questions. In the form of an interview, Scott Lash, Antoine Picon and Margaret Crawford probe the theoretical implications of agency as a notion for architecture. Pep Avilés disentangles, in his analysis of Italian neorealist architecture, the multiplicity of historical agents shaping its discourse. Sebastian Haumann examines the intersection of aesthetic concern and political agency in Venturi and Scott Brown’s project for South Street in Philadelphia. Emphasising the pertinence of transdisciplinarity to contemporary practice, Rolf Hughes develops the notion of ‘transverse epistemologies’ that is implied by it. Inspired by contemporary sociology, Robert Cowherd proposes a ‘reflexive turn’ in architecture as a reply to the ‘post-critics’. Gevork Hartoonian reconsiders Brutalist architecture for contemporary practice, arguing that the theme of agency in architecture is tectonic in nature. Against the internalisation of architectural discourse, Tatjana Schneider and Jeremy Till posit the notion of spatial agency, as it is evoked by alternative forms of practice. Three review articles, by Lara Schrijver, 'The Agency' Group, and Tahl Kaminer, demonstrate ideological rifts in the current debate.