Even in his earliest designs, German architect Hans Scharoun exhibited a keen interest in spatial and functional relationships, married in a balanced, ‘organic’ composition. Exposing the industrial building process and implementing a rigorous system of measurement were not among his priorities. Scharoun marched to his own tune amid the modernist-dominated architectural landscape of the first half of the twentiest century. In his housing projects and urban designs Scharoun approached the neighbourhood as a design unit. He translated the Nachbarschaft (neighbourhood concept) into the concept of the Wohnzelle: a living unit for 4,000 to 5,000 residents, with a good mix of dwelling types, high-rise and low-rise and commercial, urban and cultural functions. To Scharoun the relationship between the Wohnzelle and the surrounding city was important. Informed by the particularities of the context each Wohnzelle is unique and recognizable by its structure and silhouette.

Scharoun’s early (mass) housing projects include part of the Wohnzelle Siemensstadt I, an urban extension on the northwestern periphery of Berlin, for which he also designed the urban plan. The part for which Scharoun was responsible avoids the strict open-row layout that epitomizes the rest of the urban design: it is an ensemble of three long and narrow buildings, two of which form a funnel shape culminating in the neighbourhood entrance and the third forms a quarter circle. 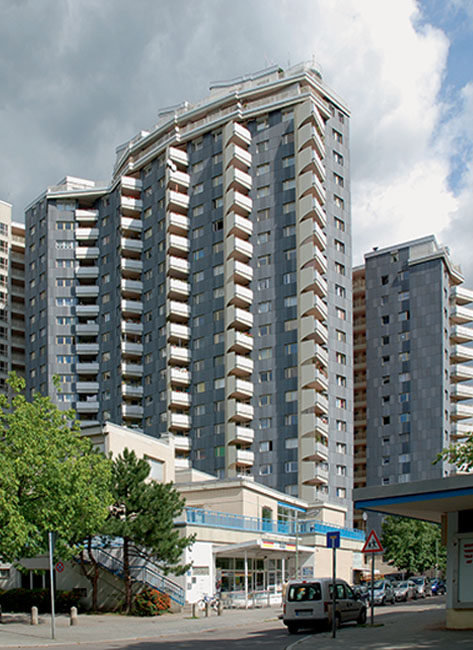