The Van der Meer formula for rock slope stability under wave attack has been in use now in research and design for more than thirty years. This paper takes the original formula as a basis and then explores into a larger field of application, as investigated by various authors, or includes improved insights in parameters to be used. The spectral period has become the leading wave period over the mean or peak period in the field of wave overtopping. First the Van der Meer formula has been rewritten to include this spectral wave period, based on original data.

A guideline how to compare new research in extending application areas has been developed, including how to come to a modification of the formula. First the essence of the Van der Meer formula is given, such as a gradually developing damage curve according to a power function and the relationship between damage development and storm duration. Each new research should be validated for these relationships before a direct comparison is possible. Such comparison can be done along graphs of damage versus the breaker parameter (including wave period and slope angle), including the original data of the Van der Meer formula.

Possible modifications to the formula are best described if using multiplication coefficients for plunging and surging waves that directly show the influence on the original formula by the deviation from the value 1.0. Two significant investigations have then been re-analysed along the developed guidelines, one on rock shape and one on rock placing.

Individually placed rock with three points of contact, or placed with a dense packing, increase stability significantly and may always be seen as a good measure. The damage curve, however, is not gradually developing, but shows a kind of brittle failure. Direct comparison with the Van der Meer formula is not possible then. A brittle failure needs a safety coefficient, showing for design similar stone sizes as with the formula.

The authors declare that they have either created all material in the manuscript themselves, or have traceable permission from the copyright holder to use it in the present manuscript. They acknowledge that the manuscript will be placed on the JCHS website under the CC-BY 4.0 licence. They will retain copyright of the paper, and will remain fully liable for any breaches of copyright or other Intellectual Property violations arising from the manuscript. 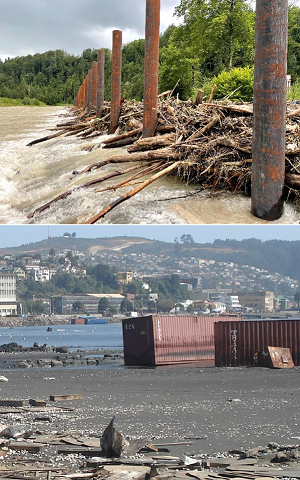