Jaap Bakema’s work and position were marked by an unshakeable belief in society’s engineerability. In his many lectures and publications he also noted a number of reservations about decision-making processes and life itself as the greater reality outside architecture’s; his optimism nevertheless seemed to know no bounds. Not only when he formulated answers to the questions of the housing shortage and the major planning issues of his own era, but also when he explained his vision of a possible future beyond the year 2000, in the twenty-first century. When Bakema wrote down his ideas for the presentation of the Netherlands at the World Expo in Osaka in 1970, he unreservedly stated about his own small country bordering the North Sea: ‘A country is planning its own change’, after which a series of catchwords painted an image picture of a hypermodern country that fearlessly embraces the future, even moulds it to its will, from water management to energy policy, from knowledge economy to open society. Visual elements in Bakema’s narrative were ‘the water, the skies, the light’ and ‘grass, corn, flowers and houses’, such as these were to be found in the work of Rembrandt, Mondrian, Van Gogh and even Provo.

Bakema jotted down everything this on a single sheet of paper, including the characteristic proposition: Wat we zijn en wat we graag zouden willen zijn! – ‘What we are and what we should like to be!’ The idea Bakema posited was that change is plannable. Planning the future and creating room for future developments was one of the key issues in his work. But how did that turn out in his work for large-scale residential development projects, all realized in the context of the post-war welfare state? A major of contention with that welfare state and its bureaucracy was the lack of free space, that everything was hemmed in by rules in advance. If you read the articles of that time, one encounters a mishmash of well-nigh endless discussions about all manner of regulations to maintain as much control as possible over future developments. In particular, the most efficient deployment of scarce resources was a thorny issue in the new egalitarian society, and how to translate this economy into rapidly buildable standard floor plans that would still allow some flexibility in use and a very modest form of comfort. 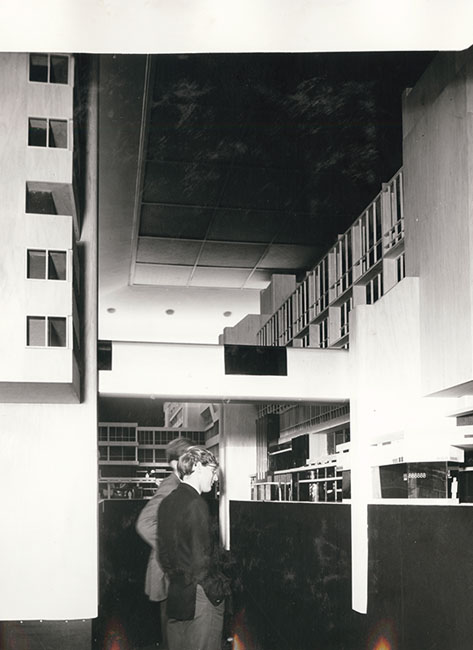