Some New Items for the Home – Part I Berlin (DE)

Jasper Morrison is considered to be one of the most successful product designers of our time. He has built up a body of work that ranges from furniture to kitchen appliances and shoes. His work often has a somewhat neutral or anonymous appearance, which also characterizes many design products from the 1950s and 1960s. Morrison himself has stated that for him, form is less important, and can often be derived from what already exists. Great beauty, he said, lurks in the obvious and ordinary object.

A year before graduating from Kingston Polytechnic School of Design (1982), Jasper Morrison visited the Salone di Mobile in Milan. Here he witnessed the launch of the Memphis group, initiated by Ettore Sottsass, where postmodernism took on an almost iconic appearance: ‘It was a very strange sensation: in a certain way we felt rejected (at least I did), but at the same time we felt free thanks to a total breaking of the rules. It was a confusing emotion: so when I got back to college I made my one and only Memphis piece, which fortunately has vanished forever’ (cited in Gabriele Neri, 34). The installation Some New Items for the Home, which Morrison designed after a three-month stay in Berlin, was clearly a way of settling accounts with the Memphis culture, where utensils were deliberately transformed into unrecognizable pieces of art, so as to shine at shows and in magazines. The installation, which was exhibited at the DAAD Gallery in Berlin, formed the setting for the presentation of a number of extremely simple, refined designs. The best known are the plywood chairs, which are completely cut from multiplex plywood, and the green (standard) bottles, whose necks have been treated. These are unobtrusive and obvious items, and their minimalist character is enhanced by their placement in a strikingly Spartan style room. 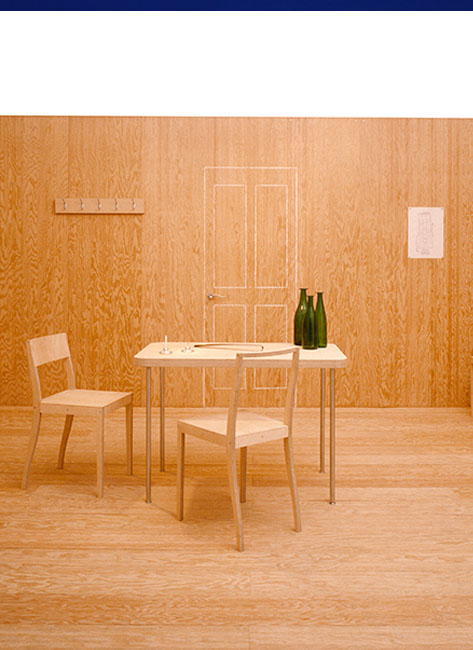