Sweden speaks. In 1939, this motto was written in large letters on the Swedish pavilion at the New York World’s Fair. The pavilion, designed by Sven Markelius, drew a lot of attention, not least because of several style rooms that were furnished by leading designers. One of the rooms, a studio, was designed and furnished by Estrid Ericson and Josef Frank, respectively the founder and lead designer of the interior design firm Svenskt Tenn in Stockholm. This interior was launched as an initial example of a new, informal, and multifaceted interior style that was much followed around the world in the years after the Second World War under the name Swedish Modern.

But the roots of Josef Frank’s design were not so much in Sweden as they were in another part of Europe, namely in Vienna. Along with Oskar Wlach, in the 1920s Frank founded an interior design firm there known as Haus & Garten. Building upon his previous work, Frank developed for his company a series of eclectic designs for furniture and fabrics that made use of various traditions and styles, from Biedermeier to the Far East. The most important aspect was the need for comfort, well-being and individual freedom. The ideal interior was one where no piece of furniture was the same, and where no addition made by the inhabitant could detract from the whole. Frank was as opposed to the idea of a Gesamtkunstwerk (for example by architects such as Josef Hoffmann) as he was to the modernist compulsion for renewal. He also had a great aversion to what he saw as the ‘romantic’ idea of a machine aesthetic, as advocated by Le Corbusier, Mies van der Rohe and Gropius. 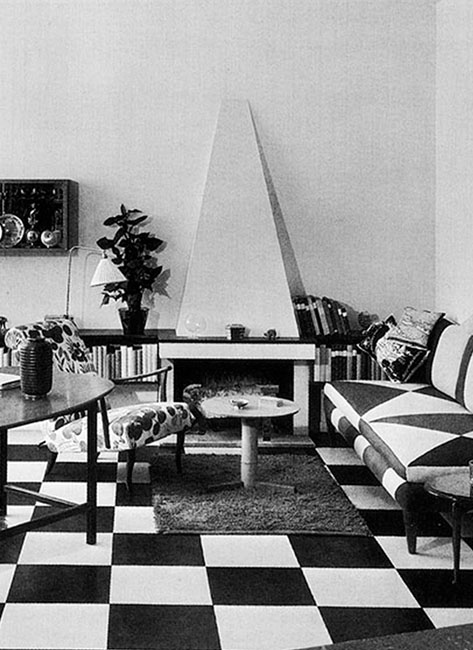