IKEA and the Dutch Domestic Landscape

In 2013, IKEA, the furniture store from Sweden, celebrated the 35th anniversary of the opening of its first branch in the Netherlands. The retrospective exhibition in an old factory building in Amsterdam told not only the history of how IKEA founder Ingvar Kamprad had turned a simple catalogue firm into a multinational, but also the success story of IKEA’s impact on the Dutch interior. The impact was primarily contributed to the annual door-to-door delivery of the thick sales catalogue; that explains why all 35 covers of the IKEA catalogue were printed on large banners, providing the visitors with a nostalgic look back. In addition, the curators of the exhibition had asked holders of the IKEA Family card (that is, the IKEA fan club) to take pictures of themselves with their favourite IKEA trophy. Of the many framed pictures of proud owners on their IKEA sofa, at their IKEA table, or in their IKEA bed, several were selected to be printed in a large format, professional portraits with a detailed explanation of what the piece of furniture or lamp meant to them.

IKEA’s business philosophy, which breaks through the anonymity of the mass-market product by having the catalogue link the name and sometimes the face of the designer to the new product, was illustrated with several video presentations in which the mostly young designers told the creation stories of their designs. The exhibition also stressed that the company had always been involved with sustainability, and that IKEA’s global popularity was mainly due to the good price/quality ratio, partly because the furniture is extensively tested for durability. That is why every IKEA store has a ceremoniously placed sitting-test machine, hissing and popping to prove this durability. Even the old argument about savings, namely that ‘furniture in a box’ is cheaper because the customer has to assemble it, has taken on a new dimension of sustainability, because of the reduced ecological footprint of flat boxes shipped via mass transport. For the future, the company imagines its claim to sustainability will mainly result from the switch to more energyefficient LED lights in its lamp designs; this was illustrated by a fairy-lit walk through a number of containers. The emphasis of this future perspective thus seems to be shifting from furniture design to lamp design, perhaps influenced by the decorative success of the Maskros – the pendant made of many loose paper flowers on stalks.

Irene Cieraad is a senior researcher in the Department of Architecture, Delft University of Technology, the Netherlands. She is a cultural anthropologist who has published widely on the subject of the history of Dutch vernacular interiors and related issues of household technology, material culture, and consumption. Irene is the editor of At Home: An Anthropology of Domestic Space (Syracuse University Press). Currently she works on a reinterpretation of 17th century Dutch paintings of the interior. 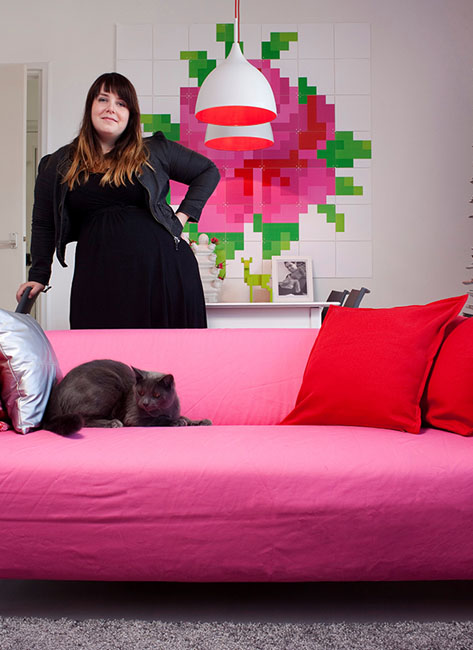