In the first half of the 1950s, editor J.M. Richards voiced biting criticism in the Architectural Review of new-built projects for the universities of Oxford and Cambridge. The buildings made no contribution to the art of architecture whatsoever and merely reflected the artistic emptiness and small-mindedness of academic taste. In the late 1950s, the tide turned. Up until the 1970s, several projects were implemented in both cities, which interpreted and breathed new life into the traditional building forms and application of materials in the two cities, sometimes in a brilliant fashion. Included in the best work from this period are the extensions to a number of colleges from designs by Philip Powell and Hidalgo Moya.

After realizing a number of projects in Oxford, they were commissioned in 1962 to design a large extension of St John’s College in Cambridge. Alvar Aalto, who was initially approached, turned out to be insufficiently interested. The project was financed by an alumnus of St John’s, wealthy industrialist Humphrey Cripps. In return for his generous donation, he yearned for a building that would last for at least 500 years. The new-build, located behind the existing buildings of St John’s, had to contain 200 rooms for undergraduates and 8 apartments for fellows. 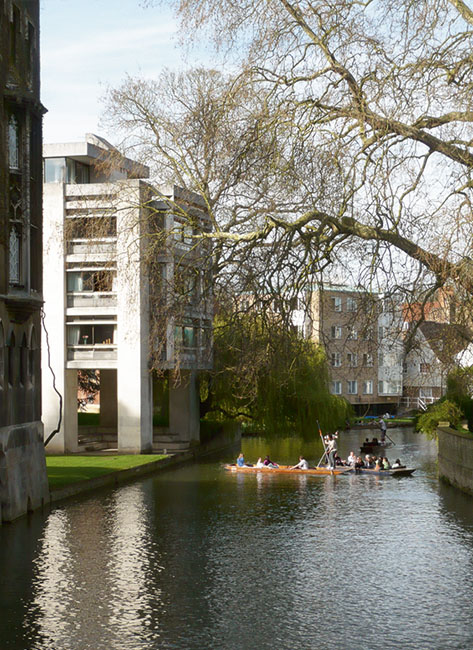