A Model for the City of Tomorrow?

The 1957 Berlin Interbau, the international building exhibition, represented an array of superlatives, beginning with its size. When German Federal President Theodor Heuss opened the show on 6 July 1957, the newly built Hansaviertel was presented and thus for the first time an entire new city district as a component of an architectural exhibition. Centrally located in the heart of Berlin, across an area of 25 ha, a total of 1,300 dwellings were established along with community facilities, including two churches, a library, a retail centre and a school (which was built outside the official exhibition zone). In other words, a miniature model city was created within a city centre, an unprecedented step for a German building exhibition.

Besides the size of the exhibition area and the model-city character of the demonstration district, the large number of prominent national and international architects who took part was likewise unique. A total of 53 architects from 14 different countries presented their experimental designs, primarily for public sector housing. In addition, there were experiments with a whole range of different residential building types: tower blocks with 16 to 17 storeys, apartment blocks with seven to nine storeys, rows of apartments with three to four storeys and detached and interlinked single-family houses. Eye-catchers were the high-rise buildings with split-level homes by J.B. Bakema and J.H. van den Broek, Walter Gropius’s lightly curved nine-storey apartment block, and Brazilian Oscar Niemeyer’s seven-storey flats, which stood on V-shaped pilotis. Finland’s Alvar Aalto came up with a hybrid tower block and apartment building that was erected close to the flats created by Sweden’s Sten Samuelson and Fritz Jaenecke, as well as Frenchman Pierre Vago’s building. Outside the exhibition zone, other highlights were the Berlin version of Le Corbusier’s Unité d’habitation and Hugh Stubbins’ Kongresshalle, which the Americans gifted to Interbau.1 In addition to the architecture of the buildings, the Hansaviertel’s urban context emphasized the exhibition zone’s character as a model city. Once a densely built residential district with its blocks of houses aligned to the streets, property division no longer played a role in the urban design and concentration of the residential volumes gave rise to large communal green zones.

Interbau was a huge success in terms of the number of visitors. Over 1.3 million members of the general public and professionals visited the exhibition, many of them from East Berlin and abroad. However, the favourable reception from the general public and the publicity the Hansaviertel buildings received was in sharp contrast to the largely negative judgement passed on the urban design concept by the architectural world at large. The most frequent criticism voiced was that ‘the exhibition lacked an idea, an underlying concept’.2 The Hansaviertel was accused of being merely a platform for showcasing individual buildings by prominent architects, without a trace of convincing urban design coherence. The Bauwelt trade journal commented in resignation that perhaps the only successful idea was ‘the presentation of the top architects themselves’,3 and that it was ‘an array of missed opportunities, due to the lack of an urban design concept’.4 While preparations were still underway, Sigfried Giedion, CIAM’s Secretary, advised the Berlin Bausenator to prevent ‘an urban design disaster at so prominent a location’. 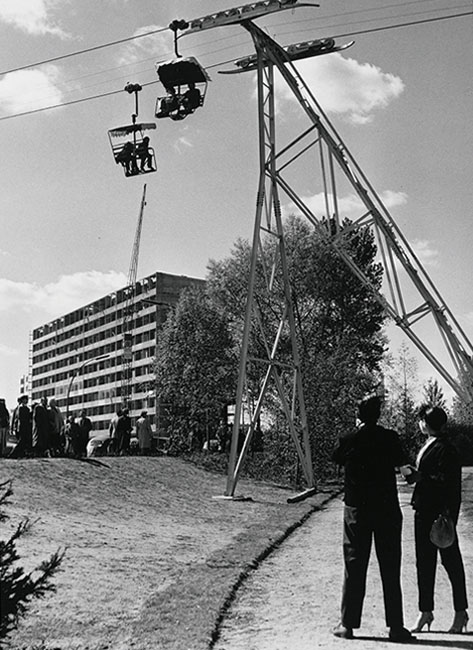