In early 2012, two buildings that at first sight look like individual houses were realized on Elandsstraat in Amsterdam. Behind the façades, there is a collective project in which six families combined forces to realize their individual housing requirements. One of the initiators is Bastiaan Jongerius. Together with neighbours from a previous collective project (a third family quickly joined in as well), he went in search of a suitable site, and found it on Elandsstraat. In order to avoid a public tender, the city council sold the plot, including the contaminated ground and buildings, and subsequently granted a subsidy for the demolition and ground sanitation. Because there was room on the site for six residential units, the collective went in search of three more families, who were found via friends, acquaintances and the children’s school. The ground was split into six titles of joint ownership and each household received the rights to a sixth of the communal garden. The establishment of the ‘Elzes’ association marked the beginning of an intensive process of meetings, division of responsibilities and monitoring of costs; consultancy firm De Regie was called in when necessary. To begin with, the surface area each family needed was determined and what the preferences were for location on the site. The initiators had first choice here. Ultimately the requirements proved to be a good fit and the architect went to work on the design.

Three houses have been realized on the Elandsstraat within two individually designed buildings. The house on the left is narrow; the different living functions are grouped round centrally situated stairs. The broader building on the right consists of two houses, which each utilize part of the ground floor. They are accessed from an alleyway that runs under the building and leads to the communal courtyard. The lowermost house has a kitchen-diner on the ground floor on the Elandstraat; the upper house has a garden room on the courtyard. 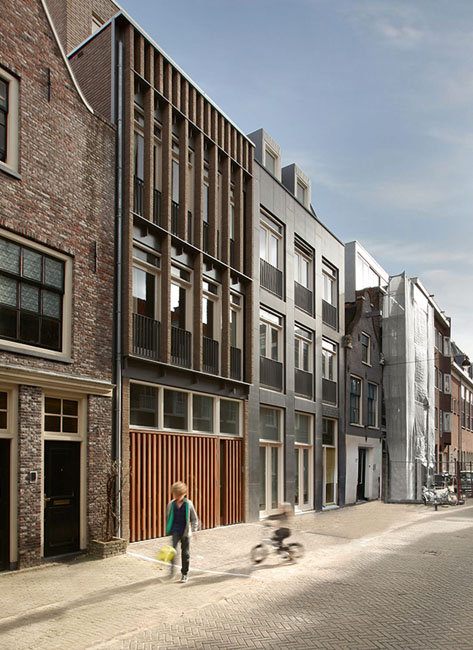