The Viennese housing project Miss Sargfabrik (2000) is the sequel to a project located nearby (1996), named Sargfabrik. They have a lot in common: bright-orange façades with an unusual programme that includes room, alongside housing, for collective, and in the case of Sargfabrik, public functions. In addition they have the same client: a collective named ‘Verein für integrative Lebensgestaltung’ (association for integrated living). The collective calls itself a ‘Baukünstlerkollektiv’ (architecture collective), and the two architects in it who produced the design have christened their firm after this phenomenon: BKK-3.

Both Sargfabrik and Miss Sargfabrik are grounded in the desire to realize a different kind of housing than was available in Vienna at the time. The uniformity of the modernist doctrine of housing construction was repellent to the clients and the designers. In their view the modernist quest for light, air and space, the segregation of housing, work, transport and leisure, and the search for new forms of housing and society had morphed into a primarily industrial housing production in which the idea was no longer to accommodate individual needs, but to produce large numbers of minimal housing cells.

Miss Sargfabrik is situated at the corner of the Missindorfstrasse and the Fenzlgasse. The bright orange colour and the long strip windows distinguish the building from its surroundings. The short side – the building forms a hook with a long side and a short side – displays the complexity of Miss Sargfabrik: here two strips of fenestration merge into one and all sorts of height variations and split-level cross sections are visible. Miss Sargfabrik does not offer public functions, but it does feature a number of communal facilities for its residents’ collective, such as a library, a laundry, two kitchens and a bar. The various components of the building take complex forms: they are linked by ramps or low-rise stairs and are delineated by walls that angle upwards. 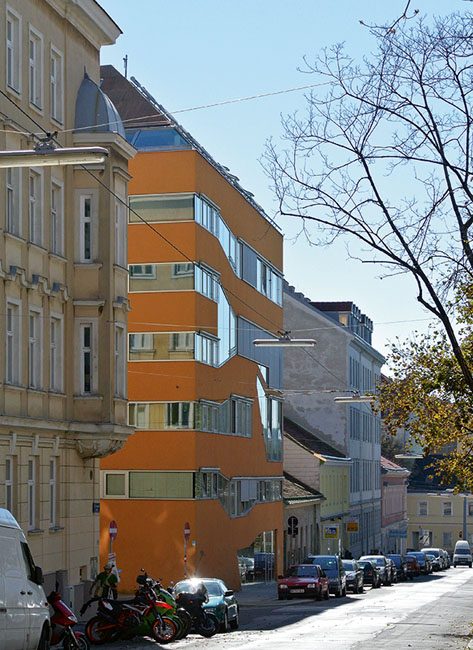