Residential community ‘Thalmatt 1’ is situated on the same wooded ridge of hills north of Bern as the 15-years-older, much better-known Siedlung Halen, and can be considered as a direct sequel to Halen. Both projects were designed by the Swiss architecture collective Atelier 5, whose aim was to develop ‘prototypes for new forms of housing’. Atelier 5 interpreted the new form as a direct dialogue with the work of Le Corbusier, particularly his Unité d’Habitation, the first example of which was completed in Marseille in 1951. As an alternative to the vertical residential block in the city, Atelier 5 investigated the possibilities for dense, urban housing on the ground in an suburban area. Siedlung Halen is generally seen as belonging to the canon of prototypes for a ‘compact low-rise enclave’. In contrast to the more rational design of Halen, which refers to an anonymous target group, the more exuberant Thalmatt 1 displays the influence of a group of client-occupants in the prosperous 1970s.

The small Siedlung Thalmatt 1 (18 houses compared to 78 in Siedlung Halen) was designed and built for a collective of clients who had complete freedom in drawing up the requirements for their homes. The most important task for the architects was the realization of a ‘collective building form’, despite the wide diversity of houses and the unpredictable dynamics during the design process. In order to create a balance between diversity and unity, three means were utilized: a simple use of materials, an elementary language of form and a strong basic structure. The material at Thalmatt 1 consists primarily of grey concrete cast in situ. The entire concentrated building mass is composed of a multiplicity of rectangular elements: shifting square units, skylights, bay windows and terraces. The architectural vocabulary refers clearly to Le Corbusier’s Unité d’Habitation, in the same way that Siedlung Halen does. 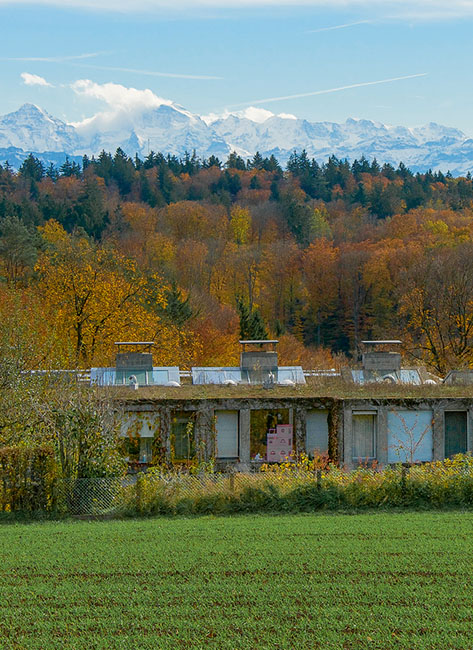