From the 1990s the Oostelijk Havengebied (Eastern Dock Area) in Amsterdam was developed into a residential and work zone, using various large projects that display diverse urban planning models. On Java-eiland (Java Island) closed building blocks were deployed to create a kind of superblock, with added functions in the courtyards. Borneo-Sporenburg is covered with a compact tissue of deep and narrow patio dwellings, interspersed with several large residential buildings. On Piet Heinkade (clusters) of sturdy buildings allude to the large scale of the warehouses that once dominated the scene. In the most recently developed section of the Oostelijk Havengebied, an old harbour called Funen, the basic model is that of villas in a park.

Funen is a triangular site of circa 3.5 ha, delimited by the railway line running between the stations of Amsterdam- Centraal and Muiderpoort, Cruquiuskade and the Czaar Peterbuurt, the neighbourhood around Czaar Peterstraat. When IBC developers bought the site from the Dutch railway company, it was no longer a harbour and had served for many years as a transhipment area for the transport firm of Van Gend & Loos. The site’s location beside the railway line was ideal for this purpose. However, its proximity to the rail tracks was more problematic for its new residential function. The project’s overall design is thus the direct product of the search for a solution to this problem. De Architekten Cie., which won the closed competition, placed a height-progressive, hook-shaped building along the railway line and Cruquiuskade. In the lee of this building are 16 urban villas, or small blocks of diverse size, housing varying numbers of dwellings, developed by a range of architects. The park which contains these urban villas, and also forms a buffer with the Czaar Peterbuurt, has provided the project with its name, Funenpark. 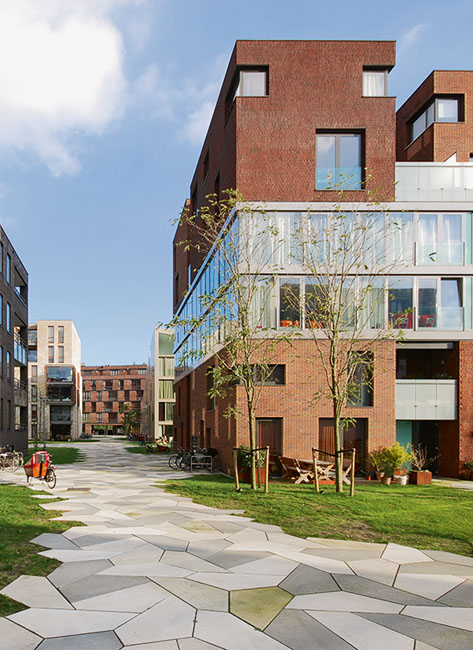