The large-scale housing programme implemented by the city of Vienna from 1923 to 1934 provides a unique example of a direct connection between politics and architecture. From 1919 to 1934 Vienna was run by a social-democratic city council, thus forming a political enclave, known as Red Vienna, in an otherwise highly conservative and clerically governed Austria. Social and economic problems were colossal in Vienna after the end of the First World War and the disintegration of the Austro-Hungarian Empire. High levels of working-class unemployment were combined with wretched living conditions, generally regarded as the worst in Europe. The city council initiated a programme to build good, affordable housing for the impoverished working classes, financed by the revenue from newly introduced municipal taxes. From 1923 a large number of building projects were completed, producing a total of 64,000 dwellings. Rents were extremely low, being based solely on a contribution towards maintenance, and considerably reduced the cost of living for residents.

This progressive programme was not translated in the architecture. While functional housing architecture with strict strip building parcellation was being developed on new estates in Germany, the architecture of the Viennese Gemeindebauten tended to the traditional, and projects were fitted into the fabric of the existing city. Designs were generally planned as more or less traditional blocks with large collective courtyards. Manfredo Tafuri’s book Vienna Rossa is perhaps the best known of the many studies of this programme. Tafuri described the projects as a conflict between technique, ideology and form, and hopelessly regressive from a typological point of view. His view of the executed plans as isolated enclaves, cut off from the city of which they were part, is perhaps best illustrated by the storming of a number of the projects by fascist troops in 1934, and their residents’ unsuccessful defence of these working-class bastions. This February Revolution signified the end of Red Vienna. 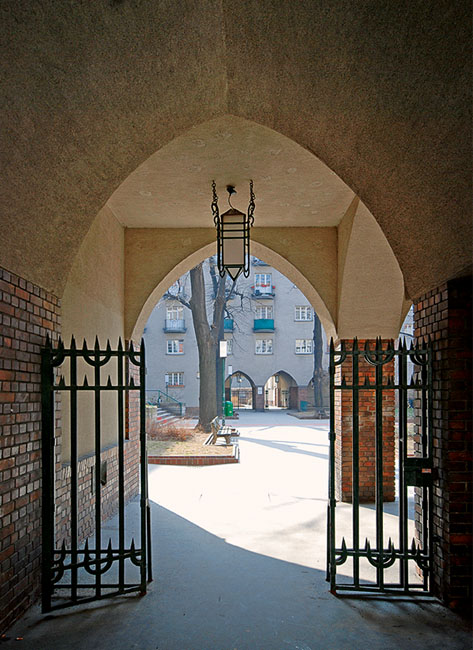