In many respects the Adelphi in London, designed and built by the four Adam brothers (adelphoi is Greek for brothers), was a pioneering project. The brothers, three architects and a banker, had acquired a leasehold contract in 1768 for a site of approximately 65 x 110 m to the south of the Strand, on the banks of the Thames. It was the first building project in London to face the river. Prior to this the river banks had been a back yard to the city, filled with warehouses, wharves and decaying homes alongside stinking mudflats.

The difference in level between river bank and city was compensated by a series of vaulted passages and cellars set on the bank; these formed the podium for a collection of prominent houses, accessed via a second system of streets. In the centre of the podium was a closed block with 24 dwellings. The 11 most prominent houses in the block, facing the river, were set somewhat back in relation to the substructure, thereby creating an open space initially known as Royal Terrace, and later as Adelphi Terrace. This is the first known use of the term terrace to denote a row of houses. Around the central block were a further three streets, also with homes designed by the Adam brothers. The substructure and superstructure homes and streets formed a coherent whole. An arcade along the river front and openings in the sides of the podium gave access to the twilight world of the lower streets and cellars. The designers displayed great ingenuity in their response to the adjacent buildings: they preserved symmetry, for example, with an indentation along the line of Robert Street which mirrored the Adam Street passage to the Strand. This recess also allowed an existing house, owned by a banker, to retain its view of the river. 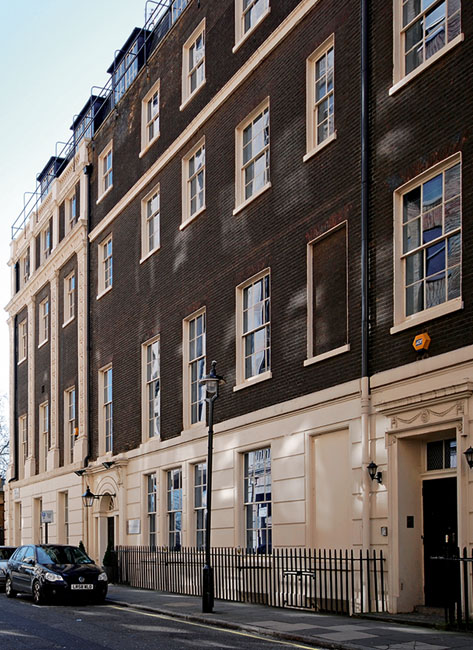