From the thirteenth century communities for unmarried women began to develop in a number of cities in the Low Countries. These begijnhoven, or beguinages, offered a safe haven for beguines, or women who wished to live a devout, chaste life, under the authority of the church, yet without the bonds of monastic vows. Such communities provided their members with mutual support in times of poverty or disease. Rich women had their own houses, while the less well-off lived together in a single dwelling known as a convent. The first beguinages were built outside cities, within their own protective walls. Later, communities were built inside city walls or brought within these walls by city expansion. Beguinages had their own church and an infirmary or hospital; larger communities had a shelter for indigent beguines, the Table of the Holy Spirit (also the name of the special fund, or dole, to support needy members of the community), attached to the infirmary.

Beguinages take two main forms: buildings arranged around a central square or garden, with blank rear walls facing the city (as in the Begijnhof in Amsterdam), or buildings set along streets within a separate, walled area. The Groot Begijnhof in Leuven, one of the first beguinages to be founded, around 1230, is a magnificent example of the latter configuration. Although this walled site initially lay outside the city boundaries, expansion of Leuven in the fourteenth century literally turned the beguinage into a city within a city. The Groot Begijnhof site is intersected by the branches of a small river, the Dijle, whose waters were used for washing laundry, an important source of income for the Leuven beguines. A number of streets form an irregular chequerboard of building blocks. The infirmary was situated on the southern edge of the site, where it was connected to the bakery, brewery and stores. The walls also enclosed sufficient space for a farm, a vineyard, orchards and kitchen gardens. The church was located beside the main entrance, opposite the infirmary. A later expansion, known as the Spaans Kwartier (Spanish Quarter), lies to the west of the Dijle and is closer to the other beguinage type, with buildings set around a green courtyard. 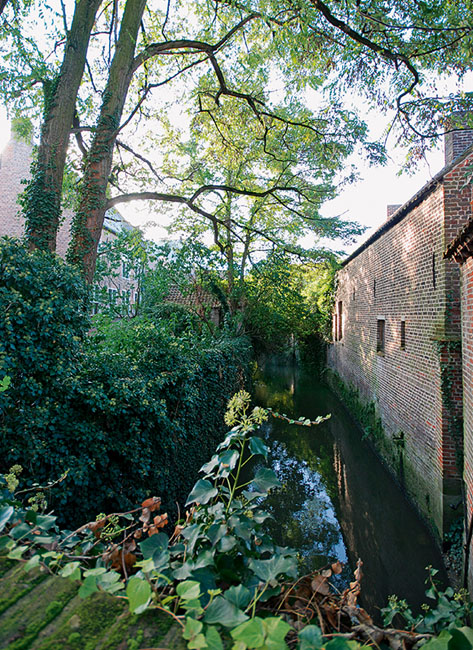