The Barbican, City of London

The Second World War left great parts of many English cities badly damaged or in poor structural condition through lack of maintenance. The greatest need was for low-cost housing, for which a series of imaginative competitions were held. However, underlying the bid to build a better Britain there was a fundamental belief that everyone could benefit from better planning and housing, including the middle classes. This is exemplified by the building of the Barbican Development, and this is its great significance; that and the fact that such a very large and visionary scheme – for 1213 dwellings – was conceived and actually fully realized. First proposed in 1955, the housing was largely completed in 1974, although the related arts centre in the heart of the development was not opened until 1982. The whole complex was the work of the architects Chamberlin, Powell & Bon. The architecture, highly expressive of the 1960s, was carried out with great care and perseverance to the end. The Barbican’s architecture is one of brutalist, indeed baroque, power, albeit exquisitely finished. It stands bulky, big and severe in its surroundings, its three high-rise point blocks still among the tallest in London. The project’s sheer size begs for an investigation into how it came into being. Most importantly and perhaps most remarkably, the project seems to be a success.

In 1945 the land north of St Paul’s lay devastated. The area had been the centre of London’s rag trade, rebuilt with large warehouses over deep basements largely around 1900, where bales of fabric had burned merrily in the incendiary attacks of late 1940. The County of London Plan, produced for the London County Council in 1943 as the basis of the capital’s post-war reconstruction, envisaged a continued business use. This vision was reinforced in the 1944 City of London Plan produced by the City of London Corporation (CLC), a historic and wealthy anomaly responsible for local government in the privileged Square Mile at the heart of the capital, that was always wary of allowing the county (though technically the planning authority) too great a hand there. 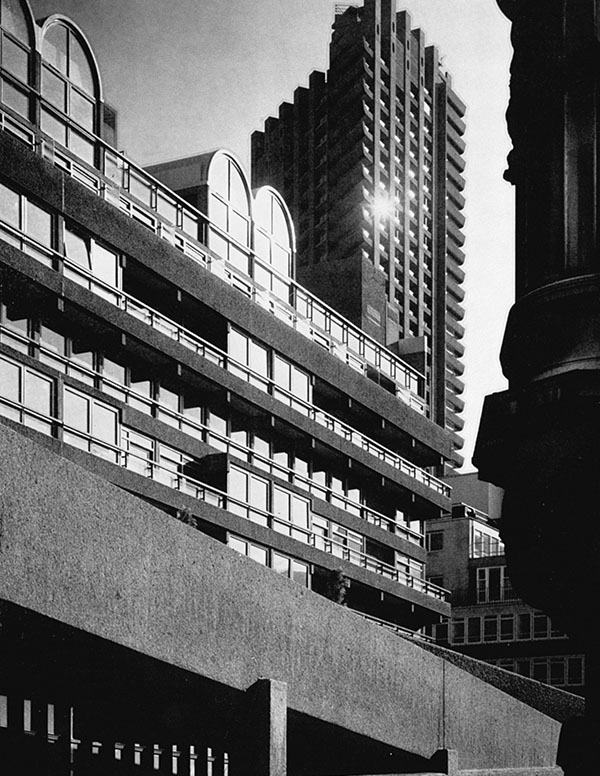