Fragments of an Ideal City

samenThe two drawings most often cited from Colin Rowe and Fred Koetter’s now-classic study, Collage City, are probably those, set side by side, of Saint-Dié and Parma. Their juxtaposition visualizes the contrast between the traditional city, in which the open space is defined by the building mass (Parma), and the twentieth-century modern city, in which the building mass seems to be lost in an indeterminate open space (Saint-Dié). Each of the two drawings, dubbed figure-ground plans by the authors, seems to be the inverse of the other, and the authors draw a parallel with the figure-ground diagrams of Gestalt psychology. The black-and-white representation – literal and figurative – emphasizes the contrast between the two models to its utmost.

These plans are followed by a representation, drawn in similar style, of Le Corbusier’s Plan Voisin. This design has become the embodiment of an architectural philosophy in which the modern city was presented, without a shred of hesitation, as the healer of all of society’s ills. Yet the Plan Voisin can also be seen as the traditional city and the modern city being slotted into one another. It is a fragment, albeit quite a sizable one, of the Ville Contemporaine, set in the heart of Paris. It creates an enclave, an area with its own, distinctive structure, imbedded in another structure and attempting to connect with it. A number of landmarks have been retained and the meandering blocks of the new layout make tentative contact with the Place Vendôme, which has not been erased. It is precisely this aspect of the Plan Voisin – the collision as well as the mutual adaptation of two apparently highly divergent visions of the city – that seems to fascinate Rowe and Koetter. Collage City is filled with many more examples of such enclaves, all drawn in that characteristic, almost polarizing style. 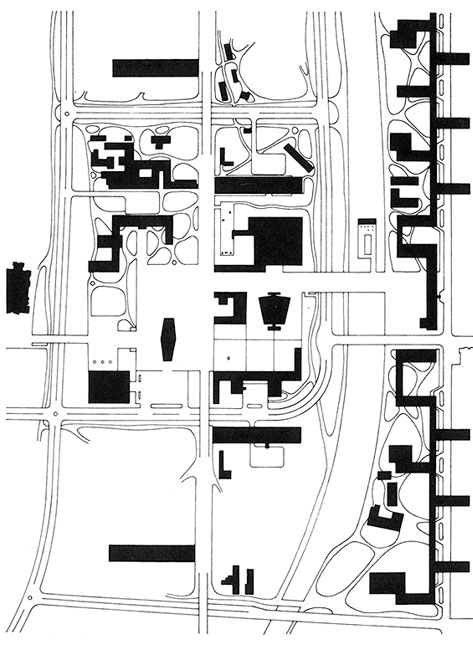