During the 1960s, large-scale, industrial housing production really took off in Europe on either side of the Iron Curtain. A 1968 publication by the Stichting Bouwresearch (Foundation for Building Research) entitled Niet Traditionele woningbouwmethoden in Nederland (Non-traditional construction methods in the Netherlands) lists more than 30 government-approved construction methods that were in use at the time. One of these was the ERA on-site casting system, developed by contractor J.P. van Eesteren with the aesthetic advice of architect R. Fledderus. The ERA system for gallery-access apartments was one of the first tunnel form systems and stood out for its 7.80-m wide bay, which made it possible to build standard two- and three-bedroom apartments without load-bearing walls. From the outset, the highly transformable living space was one of its distinguishing features. This and the rigorously implemented separation of the frame and the outer and inner walls make the ERA apartment building an early embodiment of the ideas about the separation of support and infill developed by the Stichting Architecten Research (SAR, Foundation for Architects’ Research).

The contractor used composite panels for the inner walls, which could be reused in the event of later alterations. The spatial organization of the apartment accommodates a large number of different layouts; only the position of the kitchen, toilet and shower cubicle, grouped around a single service core, is fixed. An internal hall, to be used as a playroom, provides access to the shower cubicle and toilet, and via a series of doors to all other rooms. It means that in the event of an alteration only the partition walls need to be moved and not the inner door frames. During the first few years after the system was launched, the output reached spectacular levels, first in Rotterdam, later elsewhere in the Netherlands. 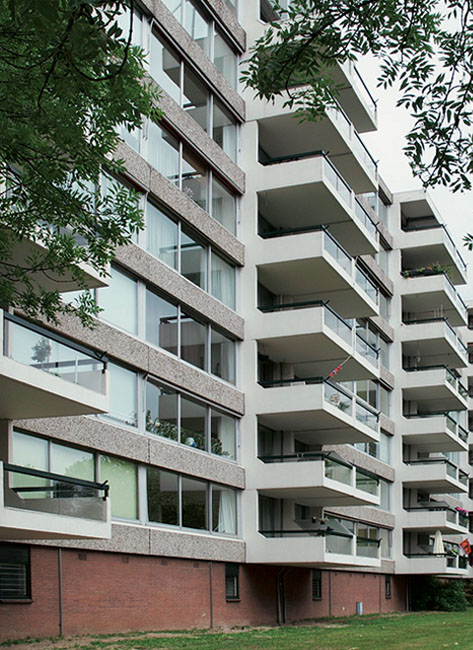