When Frank Lloyd Wright visited London County Hall in the 1950s, he was introduced to what was then the world’s largest housing body. In 1956, the Housing Division of the Architect’s Department of the London County Council (LCC) employed 310 architects who worked together on the design and realization of housing projects aimed at alleviating the huge post-war shortage of (decent) homes. Wright’s response was not one of admiration but of abhorrence. The hyper-individualist and traditionalist Wright simply had no affinity for the post-war ideals of the welfare state.

In 1951 a group of architects at the Housing Division, including Leslie Martin, Colin St John Wilson, Peter Carter and Alan Colquehoun, had been working on a new prototype for the ultimate stacked house. They designed a narrow twostorey maisonette that combined some of the advantages of the traditional ground-accessed terraced house with the need for greater density through stacking. The house was 3.35 m wide and 9.45 m deep. The bottom storey featured a front door and a kitchen on the side of the gallery and a living room behind it. The upper floor had a bedroom on either side and a bathroom and toilet in between. The result was an efficient home with a relatively small façade surface in which the privacy of living rooms and bedrooms was not affected by the gallery. The living room bordered on a double-height loggia; above the gallery on the other side of the house was a narrow escape gallery, providing each home with its required escape route. 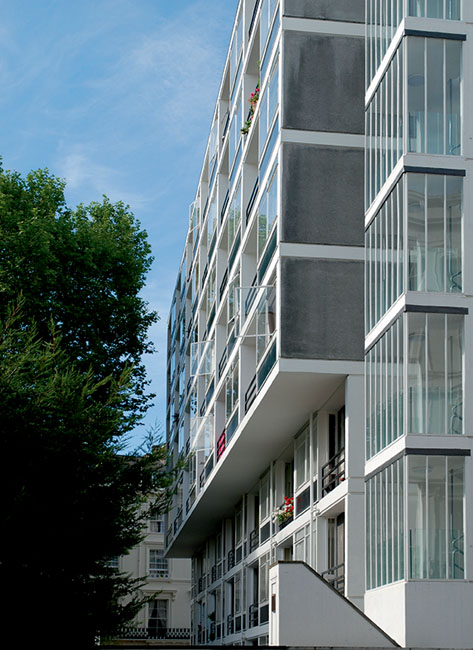