Within the space of a few years around 1930 urban design in Sweden underwent a radical shift from a romantic, Sittesque to a strictly functionalist style. Traditional, dense urban blocks made way for austere open-row layouts. In the 1940s these were in turn adapted into a more irregular, landscape-inspired open design that won a lot of praise and was much copied in post-war Europe. Competitions and exhibitions helped explore the most cost-efficient and qualitative dwelling types for these new open-row layouts. This led to the development of three main types of stacked housing: the tjockhus (deep block), the smalhus (narrow block) and the punkthus (tower block). The tjockhus can be described as a residential block measuring 14 to 16 m in depth with circulation cores that provide access to three to six apartments per storey. As a result the apartments generally have a single aspect. The smalhus, which is 7 to 9 m deep, is composed of a succession of circulation cores with two apartments per storey, which means that the dwellings receive daylight from two directions. The punkthus is essentially one segment of the tjockhus, with three to six apartments around a single circulation core. The battle between proponents of the tjockhus and smalhus was left undecided; whereas the narrow block’s dual aspect may have been preferable in terms of quality, the deep block was definitely more cost-effective in high-rises exceeding four storeys. 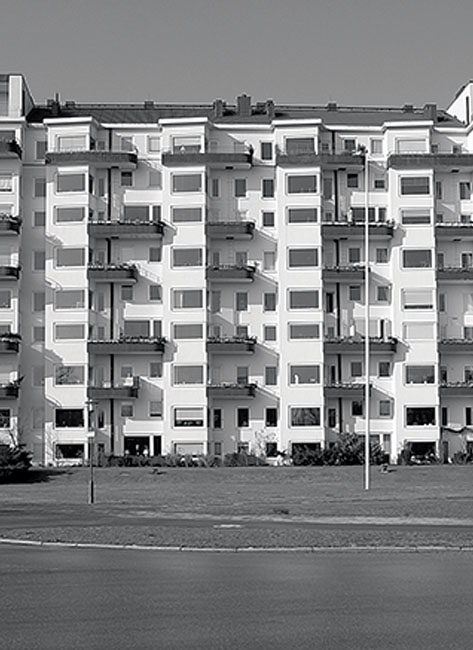