Probably the biggest revolution ever in architecture happened in 1954, when Nikita Khrushchev banned Stalinist classicism and demanded a radical industrialization of the building industry. Architects that had excelled in creating beautiful palaces for the people were put aside in favour of the building industry, which was assigned to improve construction quality and raise production figures. Khrushchev was certainly not the first to consider industrialization to be the only way to the lift the shortage of housing. While Stalin’s infamous ‘sugar pies’ were erected in Moscow, in Western Europe prefabricated housing systems were developed that were meant to serve the enormous demand for housing that resulted from the devastation of the Second World War. Not surprisingly it was Western Europe – France, to be more precise – that inspired Khrushchev to demand a de-Stalinization of architecture. Yet in the Soviet Union the industrialization of housing construction would find its most radical form. It fitted seamlessly into both the ideology and the economic system. Marxism promoted the application of scientific methods to find the right solutions to the needs of society, as opposed to capitalism, which promoted competition – a method that in the eyes of the Soviets only resulted in speculation and profit.

Economically it was the only way forward if one wanted to improve the housing conditions of the population. Actually, the same was the case in Western Europe’s post-war social democracies. Whether we are talking of the working class as the foundation of communism or of the middle class as the foundation of social democracy, both systems aim at emancipating the worker. In order to create favourable housing conditions, the income of the worker must be high enough for him to be able to live in a house built by a representative of the same class he belongs to. In other words: the amount of work the construction worker invests in this house must be low enough and the payment he receives high enough to enable him to pay another construction worker to construct a house for him. If, for instance, the amount of work necessary to build his house is 50 man years, then the builder will never be able to buy the house. He will die before he has accumulated enough money to buy it using wages he has accumulated during his working life. The only way to guarantee this is to reduce the amount of man years needed to construct a house, meaning to increase productivity through industrialization. 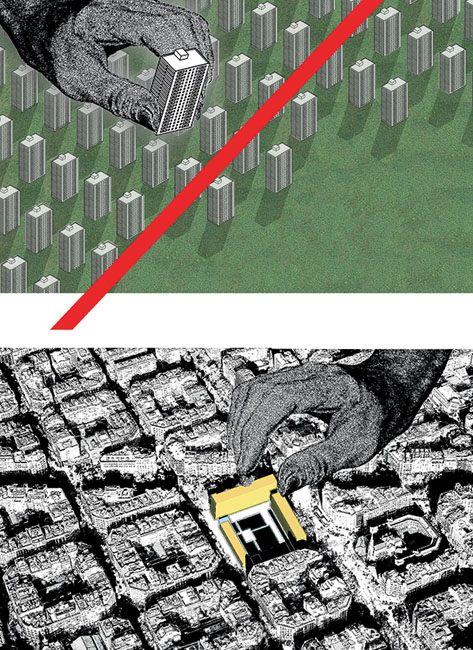