Almere-Buiten Oost, the most northerly extension to Almere, is composed of a number of neighbourhoods that are separated from each other by broad areas of green. Recently, several independent and more experimental, small-scale neighbourhoods were created in a relatively young strip of woodland. One of these projects, designed by Onix architects, set out to create a new form of living.

Ten freestanding ‘house barns’ were situated on a communal green woonerf. Each building volume accommodates three or five attached dwellings. The buildings, the open space and the planting form a whole which echoes the layout of a farm. The dwellings do not have a private garden but a veranda that marks the transition between the private and the communal domain. Setting the houses on knolls creates an obvious distance between the dwellings and the communal area, for this limits glimpses inside while providing an unrestricted view over the communal space from the living room. To the rear the height difference accommodates parking under the building, removing cars from sight. Functions such as entrances, storage and hobby areas are also situated here.

In the finish of the outside walls, Onix referred to the typology of the farmhouse with rear farmyard, in which there is a formal side, with the dwelling and ornamental garden, and a ‘rear side’ where the farming activities are conducted, plus an informal entrance to the house. Thus the Veranda Homes have a rough, functional finish on the side where the entrances and parking facilities are located, while the verandas and continuous roof surfaces on the other side create a more expressive and romantic effect. Each building volume is framed by a ‘collar’, an overhang that flows from the roof surface into the verandas via the side of the building, thereby coalescing the individual dwellings into a unified whole.

The collective garden is a privately managed, semi-public space with an open design and several footpaths leading into the surrounding woods. Contractual agreements prevent the introduction of elements to demarcate boundaries or privatization of any parts by residents. The developer was responsible for maintenance during the first few years required for the greenery to mature.

The dwellings can be accessed by car via two informal clinker roads which lead to the rear of the blocks. Parking spaces for visitors are provided at the entrance to the neighbourhood. 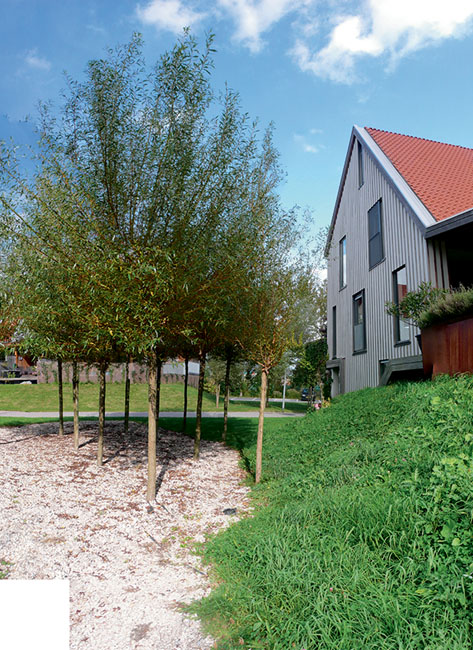