For the northern perimeter of Farum, a village to the northwest of Copenhagen, architects Tegnestuen Vandkunsten designed a new kind of housing estate that combined communal and private institutions, plus considerable interweaving of collective and personal environments, in a coherent whole. The plan caused quite a stir during the 1980 youth biennale at the Centre Pompidou in Paris. Vandkunsten designed the plan as an alternative to contemporary forms of new building, with their fixation on outward appearance and style, through a return to fælleskab (fellowship) and a more earth-based form of living.

The plan comprised a series of U-shaped groups of housing around a communal stretch of grass, facing south side by side in a comb layout. These expanses of grass are connected by a communal park that extends diagonally to the south and is bordered on either side by similar clusters of housing. An extra residential group in the centre divides the park into two parts which both lead to a southern access road and several communal facilities, including a school.

The project consists of a total of 137 dwellings, in 11 different types ranging from one to two-and-a half storeys. The higher central section to the north also incorporates several stacked dwellings, which open to the street via short galleries. On the corners are small towers with areas for communal use. Several larger community centres are distributed through the park.

The houses lie on narrow streets, where motorized traffic is permitted but not allowed to park; this is provided for in parking bays along the northern access road, where there are also several small areas with bicycle sheds and storerooms. Thus the residential streets remain free for children to play and residents to interact. The streets are flanked by strips of gravel in which some dwellings have a small front garden.

All dwellings have a private garden to the rear, bordering the communal grass area. Garden and grass are separated by a low hedge or bushes, retaining an open relationship; many gardens even have permanently open access to the grass. The grass area is so large that pressure on privacy is generally not an issue.

In addition to a front and back garden there is a third garden available to residents who wish to make use of this facility: to the south of the communal grass areas are plots of lands where residents can keep a kitchen garden or a flower garden. The character and location of these diverse gardens appear to reinforce social cohesion in Fuglsangsparken considerably. To quote a (female) resident: ‘I sit in my front garden beside the street and talk to the neighbours opposite; in the back I talk to the neighbours on that side and when I go to my kitchen garden I talk to the people who are working there beside me. I know people everywhere in Fuglsangsparken.’ 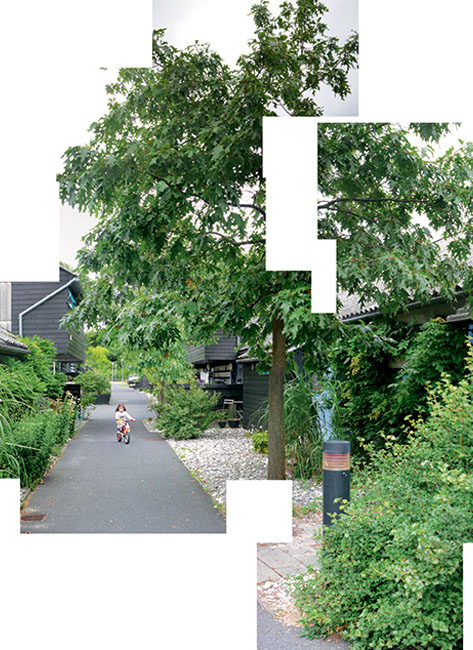