When the land from two Kent farms came up for sale in 1961, project developer SPAN and architects Eric Lyons & Associates decided to take a new step in the realization of their ambitions. They had previously created progressive and successful housing estates in locations such as Twickenham, Blackheath and Cambridge. Now they saw their chance to develop an entire new village that would express a modern vision of life in the country.

The original master plan for New Ash Green made provision for 18 residential neighbourhoods, situated around a shopping centre with communal facilities and a school. In 1969 financial difficulties forced SPAN to withdraw from the project and another project developer with another architect took over completion of New Ash Green.

Although construction of the various residential neighbourhoods and the shopping centre was well under way, Punch Croft was the only full-size neighbourhood in the development to be built entirely to Lyons’ specifications. As such, it is a fine illustration of the original intentions behind New Ash Green: a combination of living and landscape in a modern, luxuriantly green development, the Verdant Village.

The small neighbourhood is organically ordered, with houses grouped around four culs-de-sac, which branch into parking bays with a garage for each house. Around and between the groups of houses is a series of communal, pedestrian-only green spaces. Homes on the edge of the neighbourhood are situated with their front to the outside; deeper in the neighbourhood they are connected to communal green areas by their small, semi-enclosed back gardens.

Lyons designed a range of K series dwelling types (K for Kent) especially for New Ash Green, in order to obtain a wide variety of household types and allow upsizing or downsizing within the village. Nine different dwelling types were accommodated in short rows, some staggered, of three to six dwellings, ranging in size from 80 to 100 m2. With their characteristic mono-pitch roofs, wide façades with red boarding or gray-blue eternite tiles, contrasting plinth and projecting porches, they stand out sharply in their green setting.

The green areas of New Ash Green were also given a distinctive, local style of planting. A carefully designed network of paths connects the green zones through narrow gaps between the blocks of housing, revealing only one ‘garden’ at a time. Lyons described a walk through Punch Croft as characterized by ‘mystery, change, surprise’.

The creation of the new village was accompanied by the establishment of a governing and management organization, the Village Association, with a representative from every neighbourhood. Permission for any change to structures in the village still has to be obtained from the Association, a factor which has allowed Punch Croft to retain much of its original character, despite a number of alterations. 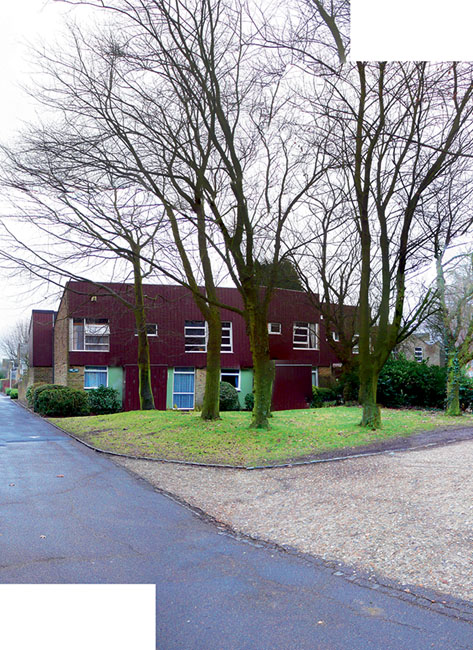