In the 1950s K.H. Gaarlandt, mayor of Emmen, brought a number of innovative architects and urban planners to his village, to supervise its development and expansion. The motto of this project was: ‘Emmen shall be a town, ok, as long as it stays a village!’ The arrival of the Algemene Kunstzijde Unie (AKU, now Akzo Nobel) synthetic thread factory allowed this village in the northern province of Drenthe to rapidly evolve into a regional centre of industry with new housing estates and community facilities.

Urban designer Niek de Boer directed development of the Open Green Town concept which formed the basis for Emmen’s expansion plans. This dictated that the town should be made attractive both to the region’s former peat workers and a new middle class that had yet to be recruited. The introduction of unusual themes in this period, such as the integration of nature and landscape, traffic-free woonerven and careful design of the communal space, won Emmen international renown. The first expansion zone of Angelslo was followed from 1960 by a second zone, Emmerhout.

The experimental urban design innovations introduced in Angelslo were further developed in Emmerhout and applied in radical ways. The plan unequivocally chose to exclude motorized traffic from the residential environment wherever possible. Provision was made for only two kinds of traffic space, vehicular streets and woonerven. The vehicular streets are designed to be exclusively used by motorized traffic: they are bounded by earth embankments with green planting and have no sidewalks. The woonerven are almost entirely free of motorized traffic, allowing children to play and residents to interact without impediment. Vehicles are parked in special parking bays or clustered parking garages in open spaces of varying design, while the houses are all situated on an informal network of footpaths with playing and seating areas. These form part of a network of paths that branch into the green lobes between the residential districts, which are connected in their turn with the surrounding landscape. 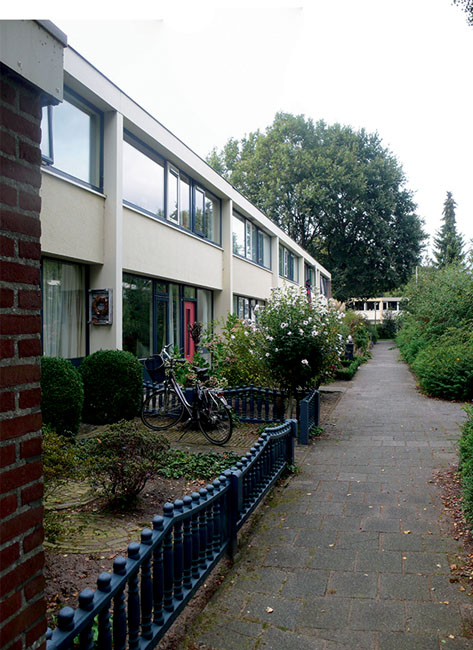