In the early years of the twentieth century a solution needed to be found for the poor living conditions endured by bluecollar workers in Helsinki. Ebenezer Howard’s ideas for garden cities in England inspired plans for a residential estate in the Käpylä woods, some 5 km to the north of Helsinki. These specified that the new garden district should be of high quality, both architecturally and socially, and furnish a model for a healthy and productive working life.

Construction of Puu Käpylä (Käpylä Wood) started in 1920. The project was supervised by the experienced architect Akseli Toivonen, while municipal architects Birgen Brunila and Otto-Iivari Meurman were responsible for the overall layout. Architect Martti Välikangas, just 26 years old, was commissioned to give form and character to the district. The designers’ ambitions are revealed by the street names, which are taken from characters in the Kalevala, the Finnish national epic.

Puu Käpylä is laid out in a uniform grid of roads and building zones, on gently rolling hills on either side of a shallow valley. The district is cut in two by the main street (Pohjolankatu), which is wider than the other roads and lined with buildings and rows of trees to give it a more prestigious appearance. A tramline (still a weekday service only) runs through this street, connecting Puu Käpylä with the city.

The workers’ homes were accommodated in wooden buildings of varying lengths. These generally consist of a basement, two storeys and a pitched roof, with entrances in the form of weather-boarded porches on various sides of the volume. The buildings are loosely grouped in diverse configurations through the wooded landscape. The smallest comprise four two-room apartments, each with its own front door. Initially these workers’ homes did not have their own lavatory or bathroom, these facilities were accommodated in small, centrally located buildings which also housed saunas and laundry facilities. 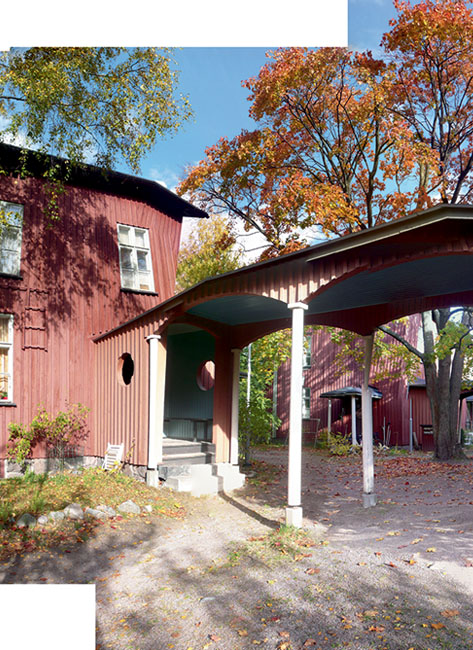