For many people the term woonerf conjures up an image of 1970s housing characterized by outmoded ideals from a bygone era. Over the decades, the awkwardly meandering structures, the bare outdoor spaces, the cluttered effect and the nondescript architecturehave come under attack. A few examples have retained their appeal, but on the whole, the term, once so influential, has come to stand for stuffy, drab structures, which find little favour with town planners today. Not everyone subscribes to this view, however. Onix Architects is one of the few firms in the Netherlands openly promoting the notion of the erf (yard) as a concept for shared living. Its architecture and terminology combine nostalgic references to small-scale living, rural communities, barns, and so forth with modern forms of communal living. For example, it has taken the typology of the erf and transferred it to a sheltered home zone or woonzorgerf, where people who need care share a sheltered environment thus allowing them to live independently for longer. The ideas were developed in a study called ‘Nieuwe erven: een onderzoek naar kansen voor een zorgeloos dorpsleven’ (New kinds of erven: an investigation into opportunities of living a carefree village life), which was published jointly with DAAD. In Almere another erf development was conceived around a group of veranda houses; in this instance the erf had no shelter function. We asked Onix architect Alex van de Beld about the erf concept and how he believes it can be developed today. 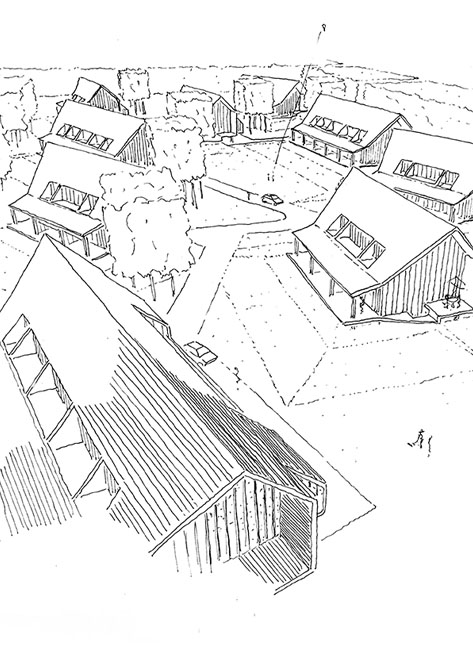