In his realized second plan for Amsterdam-Zuid (1905-1917), H.P. Berlage tried to find a balance between the picturesque and the monumental, inspired by Amsterdam’s concentric canals.

The monumental system of plan ‘Zuid’ is based on the simplicity of symmetry, structure and linearity, and on a clear hierarchy of streets.

The area between Olympiaplein, Beethovenstraat, Apollolaan and Stadionkade is symmetrical in relation to Minervalaan. This avenue forms the central axis between the unrealized Minervastation to the south (‘the city’s portal’ in Berlage’s view) and a large, monumental building to the north (which eventually became the Hilton Hotel).

Enclosed by six- or seven-storey façades, Minervaplein is the urban heart within the composition of this part of (new) Zuid. The buildings on either side of the monumental Minervalaan are five to six storeys in height, and the adjacent blocks three to four storeys. This configuration of blocks features a number of small squares and public gardens that lend the neighbourhood its small-town character. They constitute the plan’s picturesque touches.

The block between Titiaanstraat and Veronesestraat and the neighbouring public garden form a spatial unity in Berlage’s plan. At the rear, the U-shaped block opens out onto the public garden, with only a low brick wall and steel fence separating the communal garden from the public garden. The block thus distinguishes itself from the closed housing blocks that dominate this neighbourhood. Their internal spaces can only be accessed via small gates, even when they contain public services (such as schools). The U-shape of the block on Veronesestraat was probably motivated by daylight requirements. The public garden takes up too much space for the block to be closed.

In relation to the surrounding streets, the ground-floor level has been raised by approximately 1.5 m to create semi-sunken cellars and storage spaces with access from the courtyard. With the exception of the end-of-terrace houses all dwellings have a patio on top of this storage extension. The difference in height lends these patios some privacy compared with the communal courtyard.

Van Geijn and Bijlard, of architecture firm Eduard Cuypers have accentuated the block’s corners and the entrance to the internal space by adding bay windows, balconies and flower boxes, and by lowering the ridge line. The flower boxes are as tall as the communal terraces that provide access to three houses at a time. These terraces form a small cluster within the block as a whole and thus constitute a transitional zone.

Like the rest of plan Zuid, the block is executed in brick and despite its relatively sober architectural style its detailing betrays some influences from the Amsterdam School. 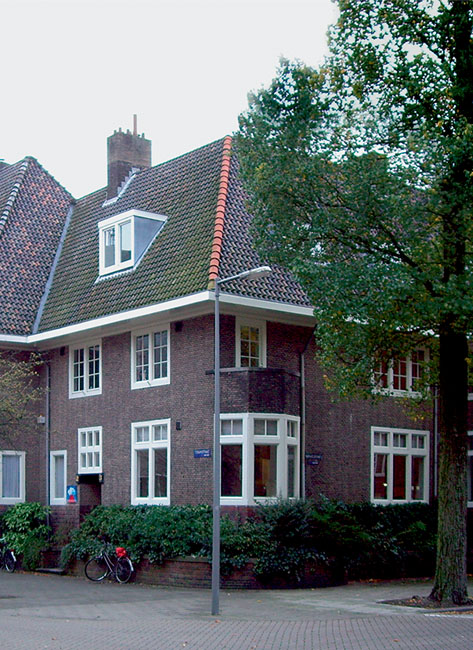