The site in the centre of Utrecht was long used as a makeshift car park. In the late 1980s the local council earmarked it for the development of new homes. When a competition failed to produce a satisfying result, the council reformulated the design brief. The focus now shifted towards a cultural and historic consciousness; the site’s history was to be central.

The lost Mariakerk, one of the five 11th-century collegiate churches that formed part of the Utrecht cross of churches, was at the centre of a so-called clerical immunity. Walled in and closed off from the outside world, it was a place that housed canons. The immunity was characterized by large plots of land, at the centre of which stood big stone houses of varying heights surrounded by lower servants’ quarters.

From the 16th century onwards, new streets and houses were built on the former immunity. The old, tall buildings from the Middle Ages at the centre came to be boxed in by new, lower buildings. Over the centuries, the buildings on the immunity site all disappeared.

The project team hired architect Bob van Reeth because of his approach to design, which prioritizes and is inspired by the ‘will of the place’. Van Reeth’s urban and architectural design harks back to the construction of the immunity. The realized plan, including its gates, fits almost perfectly onto the original ground plan.

Van Reeth has designed a closed, formal façade with stepped gables that complements the existing buildings along Mariaplaats. Two gates open onto the inner courtyard, which features the entrances to all the homes, with the exception of the six houses along the Mariaplaats itself. The houses along the informal side on Walsteeg, which look out onto the Officierstuin across the street, have been set back from the street by a few metres. A garden wall, providing a second entrance into the development, indicates the building line. The car park can also be accessed from this side.

The project’s layout is not immediately obvious. It is a configuration of squares and narrow alleyways, featuring a variety of dwelling types that differ in size, height, orientation and interior layout.

The central square forms an exception to the uniform redbrick walls and paving. It is higher and surrounded by three white-plastered façades. The material variation that Van Reeth introduces here is a distinctive touch and a clear reference to the Middle Ages.

The tallest building, five storeys, sits at the heart of the configuration and is enclosed by three and four-storey blocks. Each block is demarcated by one or more brick head walls and as such forms an autonomous element within the development as a whole. The varying heights and positions of the blocks create both enclosed and more open spaces and clear views of the surrounding city. 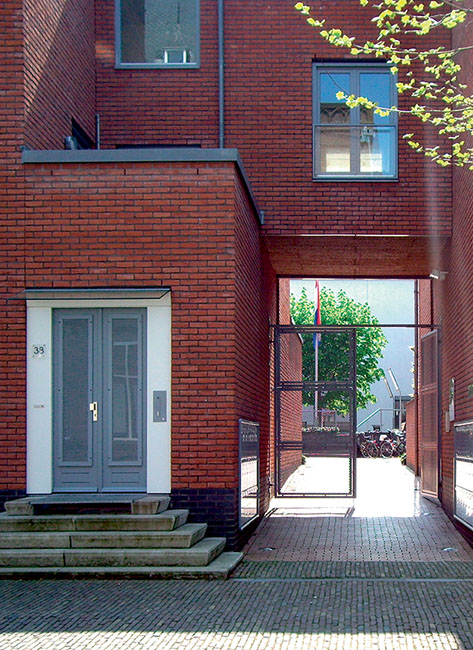