Zwanenwoud forms part of the urban design for ‘Buitenplaatsen Skoatterwâld’, east of Heerenveen. The initial phase of this KuiperCompagnons design has been divided into four elongated strips of woodland. A total of some 2,500 homes will be built among these parallel, north-south strips.

Skoatterwâld’s design will comply with a report drawn up in 2005 by the Netherlands Institute for Spatial Research (Ruimtelijk Planbureau, or RPb) called ‘Landstad. Rural Living in the Network City’. This report concludes that there is considerable demand for so-called ‘rurban’ residential environments, providing the peace and quiet, green spaces and sense of community offered by a village, along with the cultural and leisure facilities of the city. In his design for Zwanenwoud architect Sjoerd Soeters has interpreted this ‘rurban’ living as a new kind of country estate or country house.

With its landscaped parks the design sits remarkably well with the nearby country estate Oranjewoud, which was created in the early 17th century as the country seat of a major shareholder in a peat development company. It was later bought by a princess of the House of Orange who commissioned a geometric garden with a principal axis in the then popular French baroque style. From the 18th century onwards members of the House of Orange bought heath land to the east of the estate, where the Frisian aristocracy later built their country houses. Towards the end of the 18th century, the garden was transformed to reflect the English country style.

These days, the original estate comprises a number of different elements: country houses Oranjewoud and Oranjestein, the Overtuin, Tuimelaarsbos (a wood with a star-shaped configuration of paths) and Reigersbos. The various sector plans for the new Zwanenwoud district and the new garden of the adjacent Museum Belvédère can be seen as an extension of this cluster, as well as a complement in terms of leisure and ecology.

Sjoerd Soeters’ design for Zwanenwoud was inspired by Marly, one of Louis XIV’s country seats: a palace with twelve detached pavilions arranged in two rows on either side of a formal garden with a large pond. Zwanenwoud translates this into a garden around a central axis with seven short rows of ground-accessed, three-storey houses on either side. The plan consists of a total of 54 dwellings, subdivided into ten blocks of three and four blocks of six dwellings each.

The formal elevation faces the garden, with a spacious ground-floor sunroom leading to a relatively small wooden patio. This patio sits on a wide bank, thus creating a transitional zone between the homes and the publicly accessible garden. The elevated borders evoke the beds of soil framing parterres in baroque-style gardens.

The sheds are in front of the dwellings; together with the carports they separate the front gardens from the main road. Passages between the blocks provide access to the internal space.

The blocks’ brick façades have been painted black and white in an alternating pattern, with each white block topped by big swans and each black one decorated with rectangular ornaments called makelaars. These ornamentations refer to the traditional triangular uilenbord on the roofs of farms in Friesland.

The sleek design of the metal-clad sun rooms forms a sharp contrast with the ornate, brick façades. 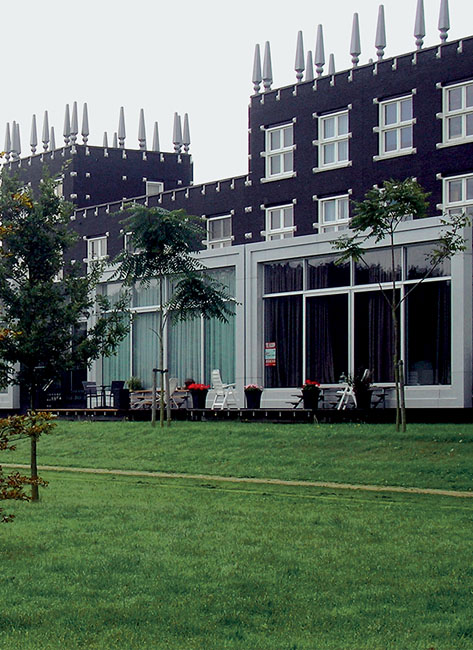