Schuttersveld forms part of the Doelen area in Delft’s historic town centre, which in the past few years has undergone a transformation from an unexceptional, second-rate neighbourhood to a luxury, much sought-after location. The area supervisor is architect Fons Verheijen. The residential development discussed here was designed by Geurst & Schulze architecten.

Schuttersveld consists of eight small-scale residential buildings, realized in the internal space of an existing block, which used to accommodate a primary school. The former playground survives as one of the two squares built within the block.

The entire development comprises three small apartment buildings, five modest housing blocks and two internal spaces. A small tower housing three apartments marks the street-side entrance to the internal space. The five relatively small blocks and the two slightly bigger apartment buildings are grouped around the first square. The five blocks contain a total of seven ground-accessed homes: one detached unit, two end-ofterrace houses and the other four grouped in pairs. The two apartment buildings are on the site of the old school building, but divide the plot in two, creating a passage to the former playground at the rear. The architect managed to convince the clients that the benefits of such a division are greater than the burden of the extra costs (two lifts, two entrances, etcetera, instead of just one of each). The benefit lies in the accessibility of the square, which is enclosed by a brick wall and sheltered by five old plane trees. The passage also extends the view of the tower of the old university library.

This intimate square is a dead end, which is all the more baffling because the playground used to be connected with the city Yet despite this restricted access, the development is an integral part of the intricate network that characterizes this part of town. Three back alleys and interior streets link the first square to Doelenstraat, Paardenmarkt and the luxury apartments in the former library, Doelentuin, Doelenplein and the town centre.

The architecture is formal and understated. The blocks are a purplish-red all over, including the brick, the window frames and the other details. Their abstraction is accentuated by the deep-set windows and double-height loggias, which are sharp cut-outs in the brick surface; there are no projecting or visible eaves, lintels or sills. The emphasis is not on the individual unit, but on the overall composition of façades and hence on the open internal space.

The square’s paving is part and parcel of the architecture. The first square has been fitted with a children’s playground and a few stone benches; in principle, the area is car-free. At the front and side the housing blocks are framed by rows of beech trees. The single-family dwellings have their kitchendining room on the ground floor and their living room on the first floor. The front doors are on the side, further increasing the distance between the homes and the square.

The apartments and houses are in the more expensive segment. They are sold with a parking space in a car park underneath the adjacent residential street, which forms part of the new development. Although the square is owned by the city, the Homeowners’ Association is also heavily involved in managing the site. 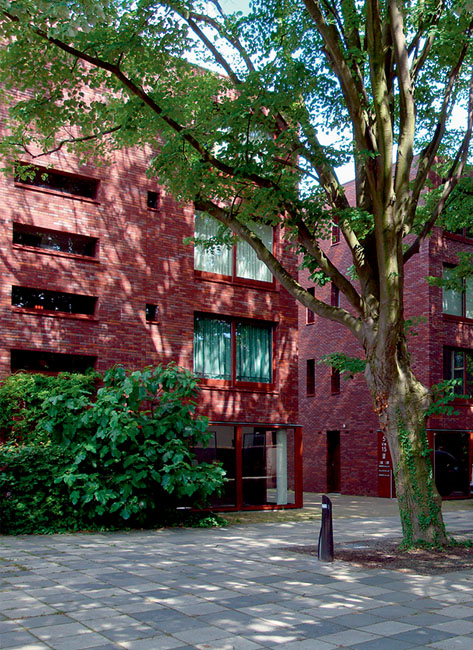