In 1994, S333 won the Europan 3 competition for the socalled Circus site to the north of Groningen city centre. The office was then commissioned to design a master plan for the entire Circus, Boden and Gasfabriek site. The city of Groningen wanted ‘openness’ for this 14-hectare CiBoGa site through a balance between development and landscape. An urban design with routes and sight lines was already on the table and stipulated a car-free zone. In order to meet these preconditions, S333 introduced the so-called schotsen concept, which defined a schots as a compact building framing a semipublic space. The plan consists of a total of 13 schotsen that form a transitional zone between the city centre and the 19thcentury suburbs. The site was badly contaminated by the gas factory and required such deep excavation that it can now accommodate underground car parking.

S333 took on the design for schotsen 1 and 2, interpreting them as urban blocks shaped by traffic flows and views towards the city centre.

Staircases and patios raise the courtyard level up to the second floor, from where residents can access the homes that were built above the commercial premises along the shopping street and above the storage spaces. These raised homes rely on the courtyard for their outdoor space. No distinct private zone was created between the homes and the communal space of the Monnikhof. (The homes across the courtyard, however, do have a back garden.)

At the top of the staircase, a row of houses passes underneath a gatehouse towards the rear. This is a dead end. In contrast to the project’s central section, a small corner here appears to have been appropriated by residents. Its public character has disappeared.

Notwithstanding the limited number of dwelling types, the design’s different orientations and rising ground level have led to a great diversity.

The winning Europan submission consisted of housing blocks with identical fronts and backs set in park-like surroundings. True to plan the whole of Monnikhof, with the exception of the commercial ground-floor units along De Beren, has been clad in horizontal courses of western red cedar.

The individual units are not visible as such and the underlying functions remain unarticulated. Throughout, the same storey-height window panels were used, with this difference that some are closed and some can be opened. The application of a single element in sets of one, two or three creates a seemingly random pattern that extends across all façades. Likewise, the passage from the courtyard to the gardens at the back is camouflaged by the fenestration. 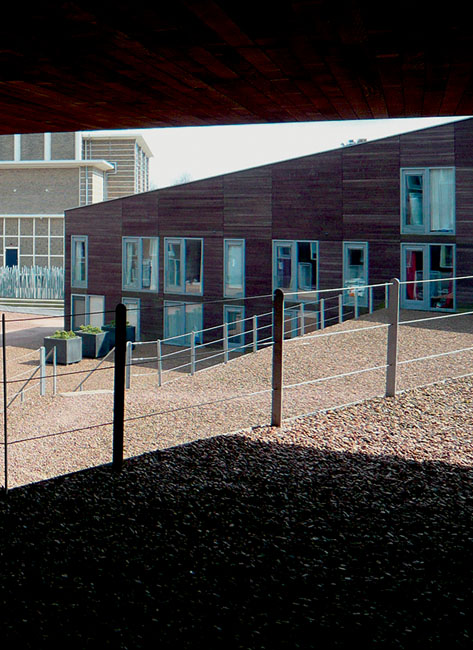