The suburban district IJburg, to the east of Amsterdam, consists of seven artificial islands. One of them, the biggest, is Haveneiland. The blocks on Haveneiland West were developed by syndicates of clients and developers/builders. Each block has a coordinating architect who, in conjunction with the other offices, is responsible for the development. Because this strategy proved to be expensive and time-consuming, the later development of Haveneiland East worked with a single project architect per block. After all, the economic recession of the early 21st century called for drastic changes to the development of Haveneiland West.

The urban design for IJburg was drawn up by Felix Claus, Frits van Dongen and Ton Schaap. It has filled Haveneiland with a grid of streets, framing rectangular blocks measuring 70 to 90 m in width by 175 m in length. The grid of blocks and streets is bisected by a canal.

One key feature of the footprint area is that the blocks’ enclosed courtyard serves as a public space. In fact, the layout of the internal spaces was paramount in the design brief. In other words, the blocks had to be opened up and the inner courtyards connected with the adjacent streets. The prescribed housing density was so high that it necessitated construction on part of the blocks’ internal spaces. This has led to a range of different public spaces within a single block. The original plan to close the internal spaces in the evening met with opposition from developers who anticipated management problems.

Apart from the elevations along IJburglaan, all blocks are framed by a 1.2-m strip, which eases the transition from public (the street) to private (the home) for the residents. Parking is largely restricted to private property, which has resulted almost everywhere in underground car parks. A notable exception is the VMX-designed block, which has a car lift. 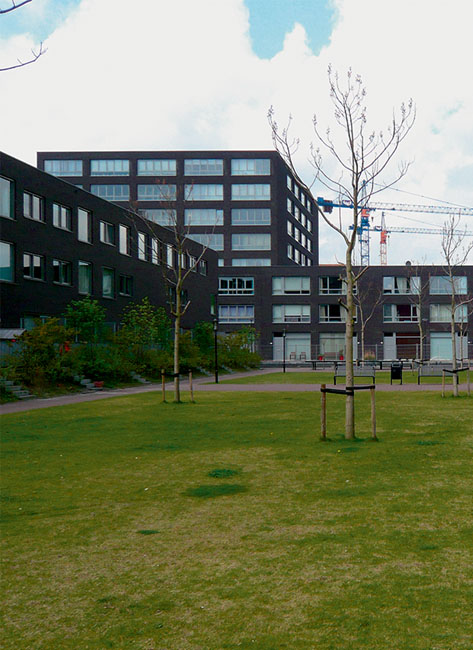