For many years, the Lloydpier in Rotterdam was nothing but a raw piece of city with mainly port industry. Now, creative businesses are flourishing where there used to be warehouses and where cargo and passenger ships left for the Dutch East Indies. Since 1995 the former Schiehaven Power Station located on the pier, which once included a battery house, canteen, transformer house, boiler house and turbine hall, has been fully transformed into a compact piece of city with new programming (music and television studio, event hall, offices and restaurant). In addition to this redevelopment, two buildings have been added to the complex: Kraton 230 (radio and television station RTV Rijnmond’s office and studios) and Schiecentrale 4b, a flexible residential and commercial building that mainly accommodates companies from the creative sector.

Schiecentrale 4b consists of two slab-shaped volumes that have been placed right behind the old generator hall of the former power plant, on top of a four-storey parking garage. The main entrance to the residential and commercial building is located on the pedestrian Schiehavenkade. The façades clearly show that the high-rise includes several functions, but it is not immediately clear which ones. The two lower layers of the slabs accommodate office spaces and after-school care facilities. These are accessible from a raised, semi-public square on the roof of the parking garage, which is furnished with a grandstand and seats that both the residents and staff can use. The other floors comprise workhomes that were sold unfinished so that the owners could design their own layout. In order to make this flexibility possible, all of the installations were designed as superstructures. Double metal-stud walls between the workhomes make it easy to combine units if necessary, and all spaces meet the maximum occupancy requirements with regard to escape routes and fire hazards, to ensure that functions are easily interchangeable. The flexible workhomes have two entrance doors, which makes it possible to use part of each unit as office space – partly in order to meet requirements set by the tax authorities.

Frederique van Andel studied urbanism and architecture at Delft University of Technology and has worked for Mecanoo architecten and DP6 architectuurstudio in Delft. In 1999, she lived in Barcelona, where she worked for architect Toni Gironés Saderra. She is an editor of DASH, and since 2006 associated with the Chair of Architecture and Dwelling of Delft University of Technology as a researcher. In 2010, she published Zakboek parkeren voor de woonomgeving (Pocketbook of Parking in Residential Areas). 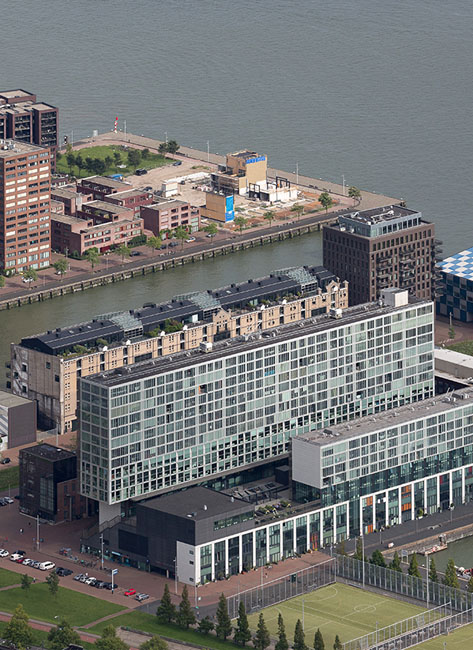