Piazza Céramique can be considered one of the keystones of the Céramique district in Maastricht, realized from 1987 onwards according to a master plan by Jo Coenen. The plan provides for a substantial expansion of the inner-city area with an urban programme of dwellings and work and cultural spaces on the former factory site of the Société Céramique and (later) ceramics producer Sphinx. Whereas most of the residential buildings are U-shaped apartment blocks with green courtyards opening onto the Avenue Céramique, this urban ensemble is in a class of its own because it turns the urban building block projected in the master plan inside-out. Rather than a single building block, the architects designed a composition of three volumes on a (parking) platform that merges into the urban composition created by the surrounding buildings. This open arrangement ensures that the publicly accessible piazza and the urban garden located to the east of block B, which is bordered by the former factory wall, become natural links in the finely meshed pedestrian network that connects various inner courtyards and streets. Two high cubic volumes (A, only townhouses and B, mixed programme) on the north side and a narrow, low building volume (C, a terrace of seven dwellings with work space, designed by Luijten/Verheij architecten) on the south side are in perfect harmony with each other and with the adjacent buildings, which are all clad in the same red brick. The stoniness of the public space underlines the formal urban architecture of the two palazzi. 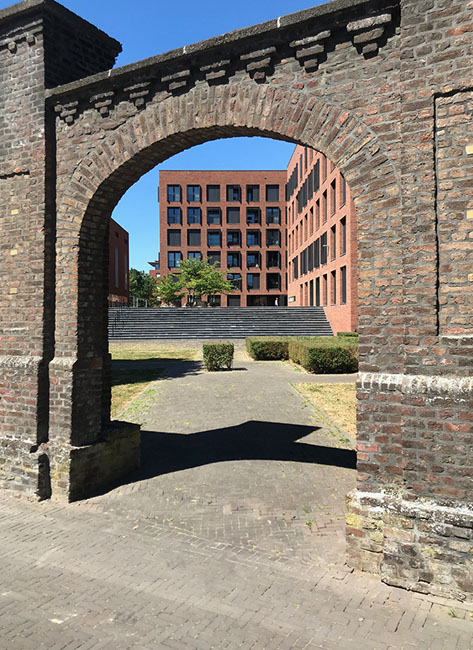