Cash’s One Hundred Cottage Factory was a development of 46 weavers’ houses built in 1857 in Coventry. A shared driveshaft ran through the upper-floor weaving studios, powered by a collective steam engine, allowing home-based silk weavers to operate power looms and therefore compete with their factory-based peers. Such buildings were called ‘cottage factories’. Arranged as a pair of 12-m-high terraces around a set of allotments, the larger 112-m-long block overlooked the Coventry Canal to the east, while the shorter, at 62 m, overlooked Cash’s Lane to the south. The scheme also included the Head Office for J. & J. Cash, Ltd., the silk weaving company that built the development and employed the resident weavers.

Recognizable as an institution from the street and the canal, the height and monumentality of the red brick development sets it apart from its residential surroundings. Gabled bays articulate the centre and ends of each block, and mark two arched entrances to the interior of the scheme. The dual use of the building is clearly legible. Large expanses of glass at the second-floor level, maximizing the natural light to looms in double-height studio spaces, read together horizontally as ‘factory’. Simultaneously, terraces of two-up-two-down ‘homes’ below are articulated through the use of vertical brickwork piers, tall chimneys and domesticscale windows and doors. The interior of the block is less formal, with rear kitchen and bathroom extensions breaking up the monolithic nature of the blocks beneath the simpler, but still fully-glazed, rear elevations of the weaving studios.

Frances Holliss is an architect and Lector Emeritus in Architecture at London Metropolitan University. Known for her research on the architecture of home-based work, she completed a doctorate in 2007 titled The Workhome . . . A New Building Type?, which she was funded to develop and disseminate from 2009 to 2011 (www.theworkhome. com). She has published widely and speaks internationally on the subject. Interested in the impact of policy and regulatory frameworks on design for home-based work, she recently co-authored an OECD Policy Brief for Home-based Business. 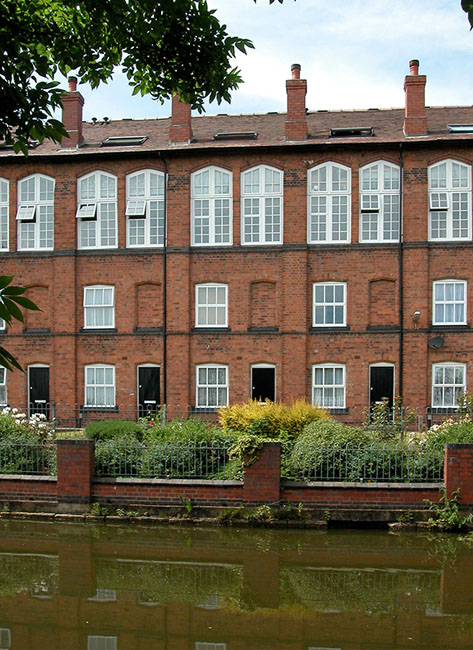