The Machiya as a New Model for Dwelling

Is it possible to organize a neighbourhood in which living and working are interwoven in a natural way? In which there is room for collectivism, for the creation of a strong community, while the privacy of the resident is respected? In 2012, Japanese studio Riken Yamamoto & Field Shop carried out a design study into a new way of living, introducing a concept that included approximately 500 people living together as a collective, the Local Community Area (LCA). The plan embodied fierce criticism of Japanese housing policies, which promote owner-occupied housing in order to stimulate the economy while people with low incomes have hardly any opportunities on the housing market. It is a policy that is very unilaterally focused on single-family homes and one-room apartments, which as individual units have little connection with the neighbourhood.

The Japanese tradition of living and working can enrich the debate on this subject, which is central to this issue of DASH, with new insights. Yamamoto’s design study is so very interesting because it examines this theme at different scale levels, from that of the neighbourhood to that of the street and the dwelling. Riken Yamamoto & Field Shop is of the opinion that the currently dominant political model with regard to individual housing is outdated. The architects believe it is time to think big and to open up the boundaries of the dwelling. In addition, they also radically question the separation of living and working. Wondering if some other housing system capable of connecting a community was administratively possible, they came up with the spatial conditions for a ‘dwelling’ that houses 500 residents, in which mutual help is a fact and that includes individual units, albeit rather small ones. If this is actually built, says Yamamoto, it will depend on the context in question how many people can live together. He anticipates a density of 500 people per hectare; perhaps less in a suburb.

Birgit Jürgenhake was trained as an architect at Karlsruhe Institute of Technology (KIT). She worked at various architectural studios (Mecanoo, EEA, KCAP) and is assistant professor at the Chair of Architecture and Dwelling of Delft University of Technology. In her PhD she focused on the façade as an intermediary between outside and inside. This brought her to Japan where she studied the Kyoto Machiya townhouse. She lectures on the Japanese house on a regular basis and started to organize and lead architectural tours to Japan in 2017. Together with an anthropologist, she recently developed a research method to use in the Master’s programme that combines visual anthropology and architecture in the scope of the care for the elderly. 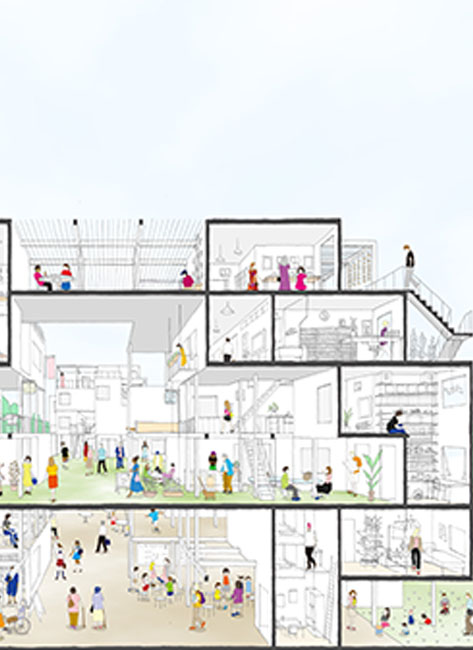