With the official division of the former minor seminary Hageveld in Heemstede into a front and rear section in 2001, a period of living and learning under a shared roof came to a definitive end. The rear section, consisting of two parallel building strips with a central chapel, a schoolyard, sports fields and part of the park, remains in the possession of the now secular Atheneum College Hageveld. For the conversion of the front section, where the regents, priests, nuns, sisters and other in-house staff lived for three quarters of a century, developer Hopman Interheem wrote out a competition that was won by Design group MYJ (now architecture firm KBnG) in collaboration with Braaksma & Roos.

The original building was built in 1923, commissioned by the bishop of Haarlem, Mgr Augustinus Callier, who also commissioned the St Bavo cathedral in Haarlem. The minor seminary preceded the grand seminary in Warmond, and was for boys of about 12 years of age and up. In the century that Catholicism flourished in the Netherlands (from circa 1860 to 1960) and the former housing of Hageveld became too small, there was a search for an estate where the seminarians could be prepared for ‘an unworldly, heavenly, angelical life’ away from earthly distractions. This place was found on estate ’t Groot Clooster, named after a fifteenth-century Bernardine monastery known, until the Reformation, as Porta Coeli (‘heaven’s gate’). 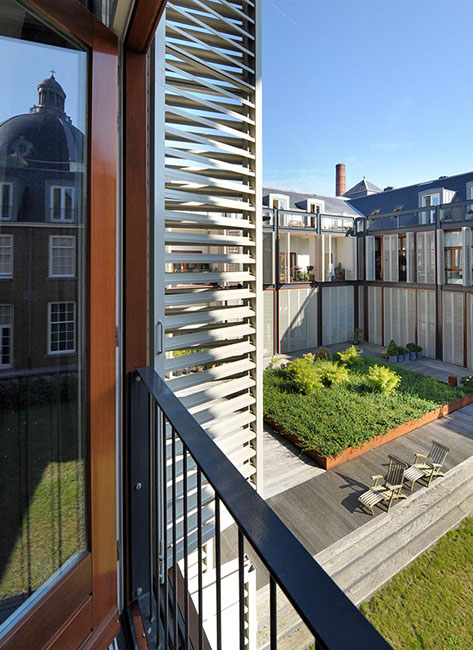