Entering the sheltered Proveniershof via the Aspoort on a beautiful summer’s day, one is likely to find residents sitting outside their homes or having a picnic on the grass of the communal courtyard. In the winter it is quiet and empty. The buildings look anything but streamlined: alignments and right angles are crooked, the widths of the dwellings differ. But the whole is united by the brickwork façades, the uninterrupted row of gabled roofs, the rhythm of the wooden doors and window frames and the communal garden. The inner angles arouse curiosity: the terraces and entrances seem to be built directly against other façades in complete disregard of the monumental pilasters and blind niches that are part of an older, classicist façade composition. This speaks of a long history.

The Proveniershof started out as the St Michaël convent, founded in 1414, home to high-born women. In 1592, after the Reformation, the complex was used as a drill-ground for riflemen, the new or St Joris Doelen. The club spaces built in the north-eastern corner for this purpose had representative Renaissance façades and a large hall. The buildings along the edges were oriented towards the city and did not belong to the guardsmen. In 1681, on the initiative of the city council, the complex was converted into a gentleman’s club, a place to accommodate eminent guests of the city including their entourages, carriages and horses. This proved to be unprofitable and in 1706 the complex was once more given a residential destination as a ‘Proveniershuis’: a type of housing that elderly people could buy into for a fixed amount depending on their age and circumstances and where they subsequently enjoyed board and lodging for the rest of their lives.

Willemijn Wilms Floet (b. 1962) is Assistant Professor at the Chair of Methods and Analysis, department of Architecture, Faculty of Architecture and the Built Environment, Delft University of Technology. For years she has been involved in (the development of) education and publications on exemplary projects informing design. Among these A Hundred Years of Dutch Architecture (published in Dutch in 1999, in English in 2002 and in Chinese in 2005), Zakboek voor de Woonomgeving (2001) and Het Ontwerp van het Kleine Woonhuis (2005). She is the editor in chief of Architectuurgids Delft (2009). She obtained a joint PhD degree Villard d’ Honnecourt from Venice Faculty of Architecture (IUAV) in 2012 and Delft University of Technology in 2014. Het Hofje Bouwsteen van de Hollandse stad, 1400-2000, on the Dutch almshouse typology, reveals the secrets of green courtyards hidden within the perimeter block. It was published in 2016, and she holds lectures on this subject in her home country and abroad. 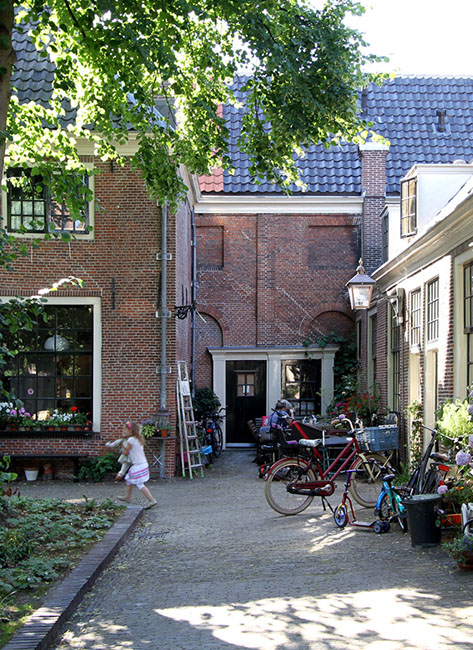