Among the many forms of architectural and urban transformations of the existing city, the rethinking of modern mass housing built throughout Europe after the Second World War has become a crucial topic in the contemporary debate. Over the last 20 years, we have seen numerous projects focused on redesigning such spaces to accommodate current needs and lifestyles, in terms of spatial, functional and aesthetic endowment, as well as environmental requirements. These numerous and widespread experiments have also been encouraged at the EU level: first, with the URBAN Initiatives (1994), later with the Leipzig Charter on Sustainable European Cities (2007) and with the Toledo Declaration (2010), intended to promote common objectives for rethinking the city’s urban and environmental qualities – starting from its housing spaces. The urgency of action has recently been reaffirmed by UN-Habitat through the ‘Urban Revitalization of Mass Housing’ competition (2013), launched as part of the Global Housing Strategy. Often, buildings have prematurely deteriorated as a result of using new experimental construction techniques based on reinforced concrete and prefabricated structures. Moreover, typological uniformity and resistance to variation limit the capacity of buildings to adapt over time, this translates also into aesthetic seriality – today seen as excessive homogenization. Also, considering the urban scale: (1) functional zoning quickly revealed its limitations, (2) the dilation and fluidity of open spaces have often proven to be incapable of stimulating density of relationships, (3) the monumental scale of architecture has repeatedly created uncomfortable environments, and (4) the poor relations with the surrounding context have strengthened the sense of marginalization. In the end, this extreme schematicism – combined with seriality and absence of distinct architectural accent – today offers a great potential for transformation. It provides designers with a fairly generic basis capable of embodying new architectural inputs, with the aim of rethinking spatial qualities of what has been inherited from the past. These experiments now underway generally seek to achieve a greater mixité (social, functional, typological, etcetera) with more variable uses of public and private spaces, a higher degree of urban complexity, an appropriate relationship between different scales and an effective articulation of open spaces. By combining more radical or measured changes in each case, a creative process can be developed giving a new character to the buildings and existing urban landscape.

Fabio Lepratto (b. 1984) studied architecture and urban design at Milan Polytechnic University and at Delft University of Technology. He obtained his PhD in Architecture, Urban Design and Conservation of Housing and Landscape from Milan Polytechnic. His research thesis, presented in 2017, deals with the contemporary transformation of postwar mass housing. Since 2010 he has been tutoring several design courses at the same university and he has been involved as a freelance architect in various housing and urban design projects. 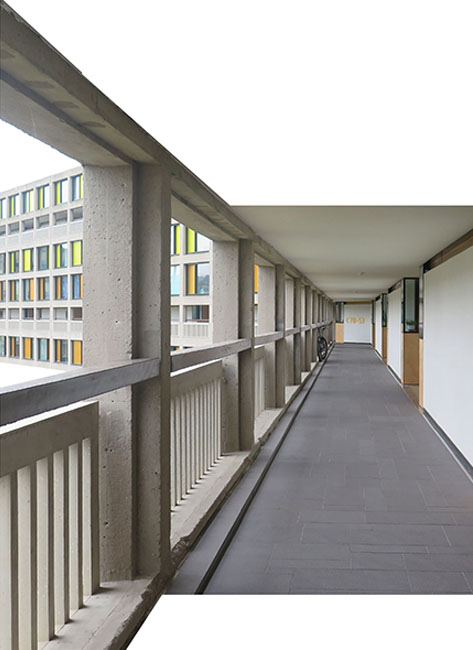