Unplanned Adaptation as a Development Strategy

Frederik Hendriklaan 22, a townhouse in The Hague’s Statenkwartier or States Quarter, was built around 1900. The house has a floor area of approximately 300 m2. In the initial phase it was probably inhabited by a family, possibly three generations and staff. Shortly before my parents bought the house the ground floor was used by a physiotherapy practice. When we moved in, the treatment and waiting rooms were changed back into a living room en suite with the kitchen in the narrow nave. On the first floor a small room and the bathroom occupied the narrow section, with a large room to front and rear in the wide section. The upper floor consisted of several small rooms.

In the 1980s two couples lived there. As recent graduates they were not yet in a position to finance such a large house independently, so decided to purchase the house together. Two kitchens were installed in the en suite rooms, one on the ground floor and one on the first floor. The kitchen on the ground floor was converted into a bedroom; the bathroom was moved into an extension in the garden. A compact bedroom and bathroom were realized on the first floor as well. This gave both couples an autonomous residential unit. After a few years there were so many offspring that the house became too small. One family moved to a house around the corner; the other stayed put. The kitchen on the first floor was removed.

A townhouse, from student housing to single-family dwelling. From the outside there has been little change to the house’s appearance, except for the addition of two attic windows; internally, it has undergone substantial alterations.

Flora Nycolaas (b. 1980) studied architecture at Delft University of Technology. She has been working as an urban planner for the city of Amsterdam since 2008. She also taught at the Hogeschool van Amsterdam for a large number of years. In 2014, she obtained her PhD from Delft University of Technology’s Urban Planning Department with the research project Wenken voor een veranderbare stad (Tips for a Changeable City). 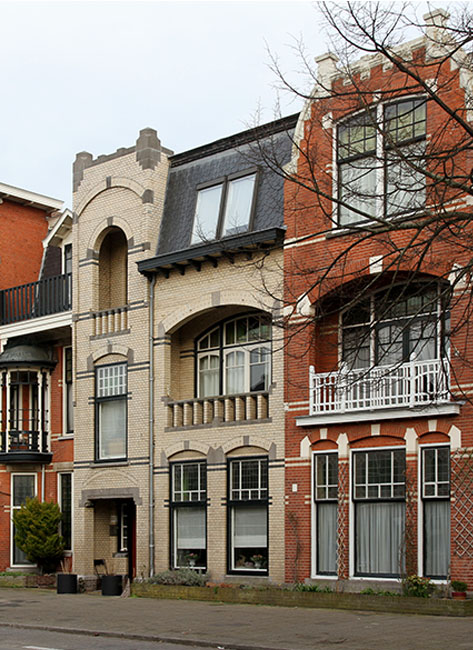