The Caja de Agua development was initially proposed by the Peruvian state housing agency in 1961, as part of its programme to create a new kind of housing project: the Urbanización Popular de Interés Social (UPIS, or Low-Income Social Housing Subdivision). The UPIS offered organized urban development to a minimum standard, substantially below previous government-sponsored housing projects, in an effort to accommodate low-income residents. The urban layouts were to be prepared by the state housing agency, with a range of basic services, and the residents committed to purchasing a core house that they were expected to complete over time using self-help labour. The design of the dwellings followed the concept of the casa que crece (growing house), first proposed in Peru by architect Santiago Agurto in his entry to a 1954 housing competition, and subsequently implemented on a trial basis in a state-sponsored project at Ciudad de Dios, Lima, in 1957. Such projects borrowed and systematized the techniques of barriada (squatter settlement) housing – progressive development, resident participation in construction – but aimed to circumvent ad hoc building through technical assistance and carefully conceived expansion plans.

Delays due to administrative and funding issues postponed the implementation of Caja de Agua until 1965, at which time it was decided to supplement the project’s 1,596 lots with several hundred additional lots on a neighbouring site, Chacarilla de Otero. Together these two projects were intended to rehouse residents from Cantagallo, a barriada housing over 2,000 families that had arisen on a private estate bordering the Río Rímac in the centre of Lima. Cantagallo was overcowded, with an average density of 890 people per hectare living in improvised low-rise housing, and its communal facilities were limited to two sports fields, two small markets and a number of bars. Due to its proximity to the city centre, multifamily housing was deemed more appropriate for this valuable site (although this was never built; the site now houses government facilities).

Helen Gyger has a master’s in liberal studies from the New School for Social Research, New York, and a PhD in the history and theory of architecture from Columbia University. She is the coeditor of Latin American Modern Architectures: Ambiguous Territories. 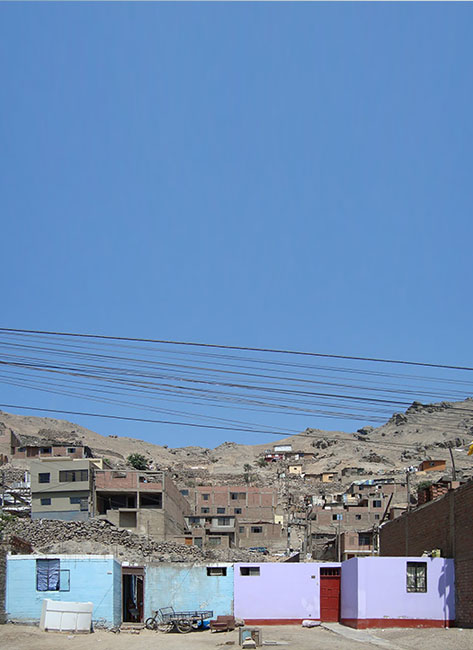