In the mid-1960s, the Greater London Council (GLC) initiated the setup of a programme and design of a New Town for no less than 60,000 people in East London: Thamesmead. After the First World War, the GLC had begun the large-scale demolition of inner-city slums consisting of Victorian backto- back dwellings built for the working classes. This slum clearance process continued through the 1950s, 1960s and 1970s. Thamesmead was intended, among other things, for the resettlement of families from the cleared neighbourhoods. The location of the new residential area was to be the site of the Woolwich Royal Arsenal, which had fallen into disuse. This originally low-lying wetland area between the River Thames and the Abbey Wood hills had been deemed unfit for large-scale development for years due to poor soil conditions and the danger of flooding. However, lack of space and a high-pressured housing market changed all that and the location was developed despite the risks.

Unlike the first generation of English New Towns, which was considered monotonous even then, Thamesmead was to become an example of the ideal New Town, with a wider variety of building typologies as well as more space for employment and services. The original 1967 master plan shows a large number of long-meandering blocks, the so-called spine blocks that form the back bone of the district: a long string of buildings along the Thames with branches going inland converging in a large central area around a marina by the river. The spine blocks created a wind and noise buffer for the low-rise neighbourhoods lying behind them, while offering a safe traffic route from the residential areas to the centre through an internal system of raised pedestrian roads. In accordance with the then prevailing opinion that the separation of traffic types through a raised pedestrian circuit would result in a safer living environment (which was also applied, for instance, in the London Barbican, see DASH – The Urban Enclave), an internal system of routes through the spine blocks was developed. In the case of Thamesmead this was in perfect keeping with the requirement that because of the danger of flooding, there were to be no residential spaces on the ground floor and escape routes had to be present at every level. The other restrictions of the location are also used to beautify the neighbourhood and make it more liveable. An intricate system of water courses was proposed for the purpose of water storage; the boggiest areas were transformed into small lakes. In advance of the construction on location, building firm Cubitts put a factory in place for the production of prefab elements to allow the quick building of a large number of houses. 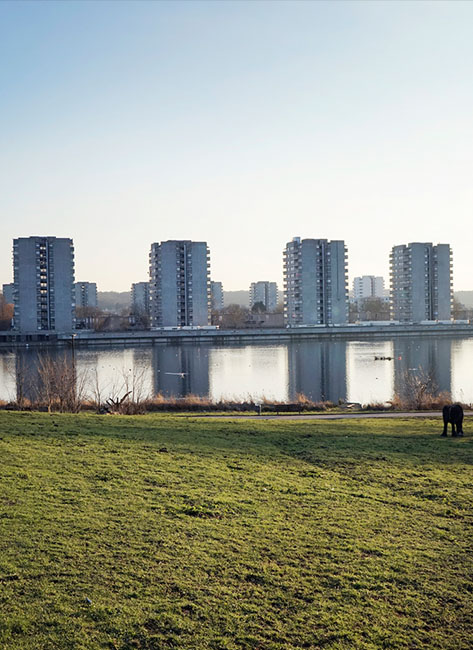