In 1862, American banker and philanthropist George Peabody, who worked in London, established a trust with the aim of improving the living conditions of London’s poor. The trustees decided to focus on the realization of good and affordable housing for the poorest members of the working class. Victorian England was very aware of the huge shortage of adequate housing for the poor, but the prevailing view was that the market had to resolve the matter. In support of the trustees’ proposal, Peabody eventually donated the – by the standards of the time – huge sum of £ 500.000. The basic principle of the Trust was that its activities were to be perpetual; therefore, the net income had to be sufficient to both achieve capital growth and to finance new projects. The first building project along Commercial Road in Spitalfields was completed in 1864. The design was by Henry Astley Darbishire, who would continue to be the Peabody Trust’s resident architect until 1885. Darbishire developed a standard that would be used by the Trust for more than 40 years. The simple and robust design of the standard Peabody Building allowed the achievement of a net yield of more than 3 per cent of the investment. The standard was designed as a rectangular volume of four, five or six floors with ten rooms each. The ten rooms were clustered into a total of five one-, two- or threeroom apartments. Each floor had two toilets and two sculleries for collective use on either side of a centrally located stairwell. The setup was extremely rational: clustering all sanitary facilities outside the dwellings kept the pipework to a minimum and always accessible for maintenance. The dwellings themselves were equipped with fireplaces and built-in cabinets. The windows were placed deep in the walls, flush with the plastering inside. The exterior was very sober, with merely a couple of horizontal ribbons and frames in the masonry, a classically framed main entrance its only decoration. 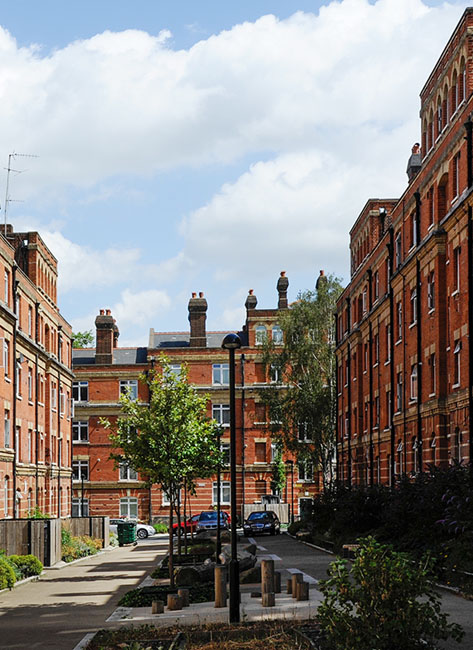