In 1949, Lima’s modernist apotheosis appeared imminent: the Plan Piloto, the city’s first master plan, had applied the techniques of scientific planning to analyse the city at its various scales – from the historical core to the agricultural areas supplying it with food – and to establish a logical course for ‘channelling its urban development’. But by 1954, a follow-up study warned that ‘the overflowing vitality of the metropolis in its blind force of expansion’ was setting in train problems which would only intensify over time: ‘the traffic congestion endlessly increases . . . delinquency grows; the city is choking itself in a dreadful ring of clandestine dwellings . . . a drop in the standard of living threatens.’ All this was the result of an unprecedented rate of population growth, largely due to rural-urban migration: established planning processes were being overtaken by the rapid emergence of barriadas (squatter settlements), as authorized housing could not be built quickly and cheaply enough to meet the demand. Reluctantly, the study confessed: ‘An economical system of urbanization and construction that would allow us to avoid the overcrowded and unsanitary conditions that appear in the “clandestine neighbourhoods” has not yet been devised.

The establishment of the improvised ‘Ciudad de Dios’ (City of God) on Lima’s southern periphery, achieved through a large-scale land invasion on Christmas Eve 1954, dramatized the desperate nature of the capital’s housing crisis. Although this method of forming barriadas had proliferated over the previous half decade, the Ciudad de Dios invasion, involving 8,000 people, was by far the largest to date, testing the limits of the state’s tolerance for extrajudicial development and provoking it into a more assertive response. After initially insisting that Ciudad de Dios would be forcibly closed down, in 1955 the government turned to planning law to broker a solution, devising new guidelines that could better accommodate – but also more effectively regulate – these emerging patterns of urban development. This tactic culminated in 1961 with the comprehensive set of reforms advanced in Law 13517, which outlined a new approach to understanding and shaping the selfbuilt city. While prevailing urban planning techniques had failed, confidence remained that once its techniques were recalibrated in line with a revised regulatory framework, planning professionals would again be able to deliver rational and effective solutions to ‘channel’ urban growth. This article assesses how efforts to apply the new regulations unfolded and how they fared in practice.

Helen Gyger is the author of Improvised Cities: Architecture, Urbanization, and Innovation in Peru (University of Pittsburgh Press, 2019) and the co-editor of Latin American Modern Architectures: Ambiguous Territories (Routledge, 2013). She has degrees in studio art from Sydney College of the Arts, University of Sydney, a Master’s in Liberal Studies from the New School for Social Research, New York, and a PhD in the History and Theory of Architecture from Columbia University. 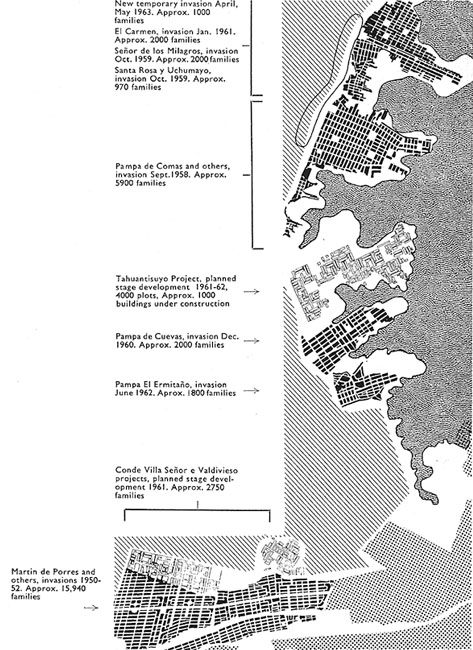