At the 2007 Milan Furniture Fair, the Japanese project developer Mitsui Fudosan presented a concept home called Tsunago, designed by Kengo Kuma. The home showed ideas and concepts that the company wanted to use in apartment buildings for the Japanese market. Tsunago means ‘connect’, and Kuma elaborated on this theme on various levels. A connection to Japanese culture was created by imbuing the home with elements of traditional (residential) architecture. The walls of the house were designed as bamboo screens, known in Japan as sumushiko. Kuma here not only interwove his design with the Japanese building tradition; the transparent character of the sumushiko also focused on the connection between the inner world of the home and the outside world.

The floor plan was a simple rectangle, divided into quadrants. This type of plan is called a ‘rice field character’ plan, because of its similarity to the Chinese character ta ( ), which means rice field. Here, the floor plan was extended with a veranda over its entire width. The home had two outdoor spaces, both of which further showcased the theme of connection. Firstly, there was an entrance space modelled after the traditional doma, which here was implemented in stone instead of the usual hardpacked soil and charcoal. The Tsunago doma had walls, but no ceiling, which produced an ambiguous relationship between inside and outside. The prominent water sculpture was a reference to similar features in Buddhist temples, namely tsanukai, where they enable a ritual cleansing before one enters the temple. 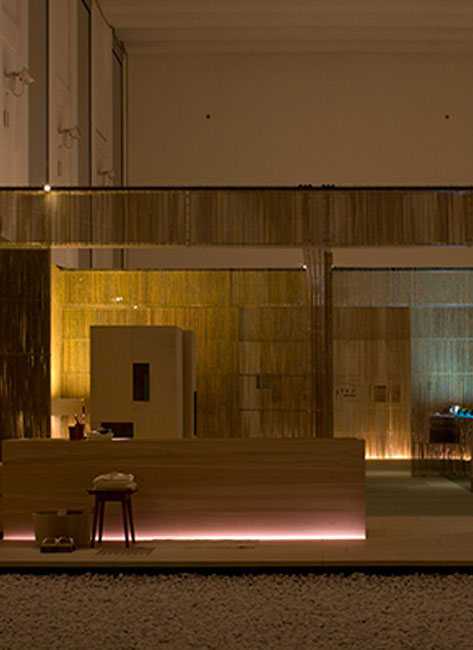