In 1971, Italian architect and artist Ugo La Pietra had already developed a first draft of the Casa Telematica for the exhibition ‘Italy: The New Domestic Landscape’, which took place in 1972 at the MoMa in New York. The concept included a house with a triangular cross section, which La Pietra used to examine the potential impact of engineering and technology on the home, and on domestic life. Using images reminiscent of Superstudio’s The Continuous Landscape, La Pietra presented the house as a space where people come together, but also one in which a variety of information-processing equipment has been included, which allowed for communication with the outside world.

In the framework of the International Trade Fair of Milan that was held in 1982, La Pietra again addressed the issue of technology and the domestic environment, and redeveloped the Casa Telematica. Instead of the single triangular space, there was now a simple square floor plan with a rectangular cross section, more or less traditionally divided into living room, kitchen, bedrooms, etcetera. In this arrangement, the Italian avant-gardist appearance made room for a postmodern idiom: primary shapes, neon lights and bold colours. Precisely by choosing a traditional layout of the house, La Pietra was able to question various domestic rituals. 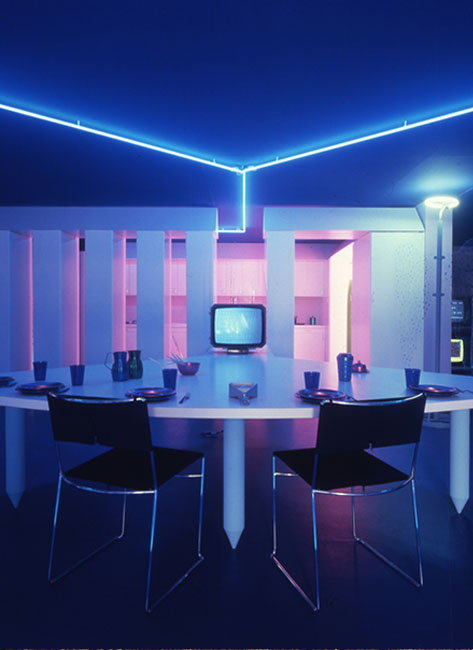