Danish architect Finn Juhl (1912-1989), the ‘father of Danish design’, was commissioned in 1950 by Norwegian art historian T. Krohn-Hansen (at the time, director of the Nordenfjeldeske Kunstindustrimuseum in Trondheim) to furnish one of the museum’s rooms as an office, to be part of the museum’s permanent collection. This workspace was meant to enter into a dialogue with the museum’s existing Henry van de Velde interior. By means of the character of the space, the materials and the decorative objects, the new room was meant to typify the lifestyle of the years 1940- 1950, the period of Scandinavian design.

Finn Juhl was initially given a dreary, elongated and narrow space of 3.3 x 6.8 m, with two window openings on the long side. But to achieve his goal, he needed more space and light. He convinced the museum’s directors to invest in an architectural intervention: over a length of 4 m, Juhl added a 1.1-m-deep bay window that offered floor-to-ceiling views of the city and the Trondheim Fjord, while also providing enough space to accommodate an office arrangement. Immediately next to the entrance to this space, he installed a narrow strip of glass (also from floor to ceiling) with a deep jamb. 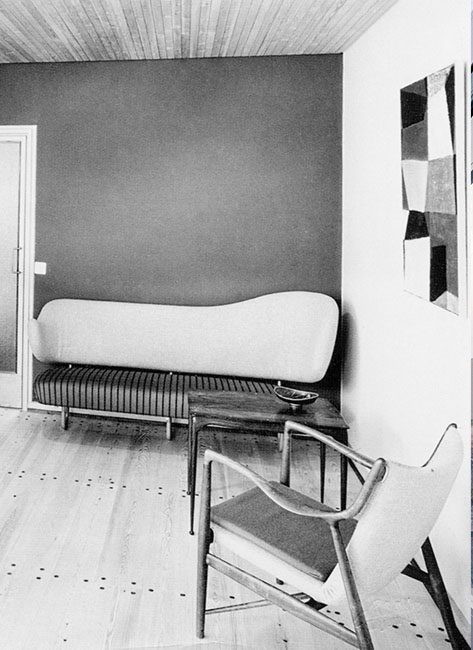