Not only the Weissenhofsiedlung was built in the context of the Werkbund exhibition ‘Die Wohnung’ in Stuttgart, in the centre of town an exhibition also took place, featuring different products and materials that play a role in the construction and furnishing of homes. Mies van der Rohe asked Werkbund member Lilly Reich, who had made an impression with her design for the exhibition ‘Von der Faser zum Gewebe’ in Frankfurt (1926), to design this exhibition. She opted for an austere approach with one product group per hall, for example sanitary facilities, kitchens, curtains, furniture and wallpaper. Hall 4 (devoted to the mirror glass industry) and Hall 5 (with a presentation by the Deutsche Linoleum Werke) were co-designed by Mies and Reich. The actual initiative for the Glasraum in Hall 4 came from Mies, who was looking for a materials sponsor for the glass in his Weissenhofsiedlung housing block.

The Glasraum consisted of three interconnecting spaces that invoked the suggestion of a house: a study, a dining room and a living room. The visitor moved through these three spaces in a pendulum-like motion, whereby the glass walls (as is often the case in Mies’s houses) did not literally limit the spaces, but instead functioned more like independent elements that suggested the outlines of the rooms. The central wall between the dining room and the living room consisted of two large, double-sided frosted glass panels; a similar panel was at a right angle to this wall, and formed the separation between the entranceway from Hall 5 and the living space. The other glass walls were composed of narrower panels (mouse grey, olive green and clear glass). All of the walls were made with the same metal profiles. 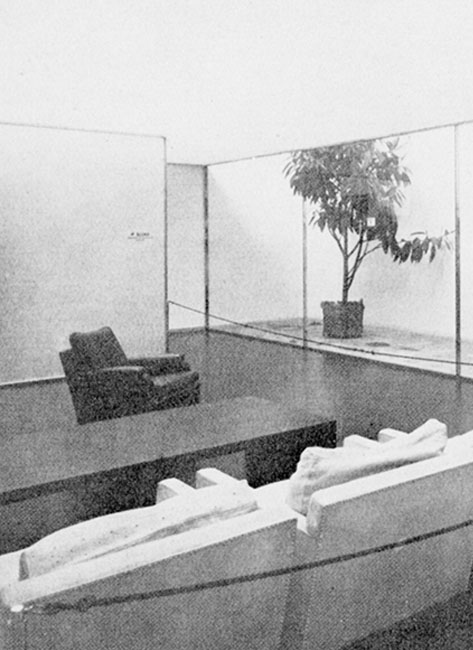